FUGITIVE TURNS SELF IN 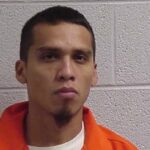 Jonathan Lugo, 27 years of age, listing a Windy Gap Road address in Cashiers, NC, who has been wanted since March 22 for the shooting of Fernando Rangel Lopez, surrendered himself on Thursday, April 15 to officer’s of the Jackson County Sheriff’s Office.

Accompanied by his attorneys, Rusty McClain and Jonathan Song, Lugo arrived at the Magistrates office shortly after 2:00 PM and was taken before the Magistrate where he was given a $75,000 secured bond.