Note:  This article ran in the Cherokee One Feather on Thursday, April 8.  We post it here at this time due to the fact that our website was down that week.  Thank you. 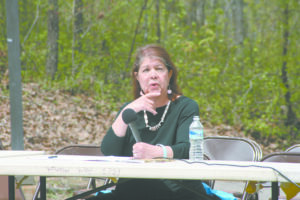 “Our personal and national hearts are heavy with sorrow and sadness with the passing this morning of Wilma Mankiller,” said Chad Smith, Principal Chief of the Cherokee Nation.  “We feel overwhelmed and lost when we realize she has left us but we should reflect on what legacy she leaves us. We are better people and a stronger tribal nation because her example of Cherokee leadership, statesmanship, humility, grace, determination and decisiveness.  When we become disheartened, we will be inspired by remembering how Wilma proceeded undaunted through so many trials and tribulations. Years ago, she and her husband Charlie Soap showed the world what Cherokee people can do when given the chance, when they organized the self-help water line in the Bell community.  She said Cherokees in that community learned that it was their choice, their lives, their community and their future. Her gift to us is the lesson that our lives and future are for us to decide. We can carry on that Cherokee legacy by teaching our children that lesson. Please keep Wilma’s family, especially her husband Charlie and her daughters, Gina and Felicia, in your prayers.”

Principal Chief Michell Hicks said, “The Cherokee people have suffered an indescribable tragedy with the loss of such a beloved and respected leader.  Wilma had an uplifting approach to leadership and embodied all the true values of a strong leader; her strength, wisdom and compassion set an example for us all.  She will always serve as an inspiring force for all Cherokee people.  My thoughts and prayers are with Wilma’s husband and family, but we can all take solace in the fact that her legacy will live on.”

President Barack Obama stated, “I am deeply saddened to hear of the passing of Wilma Mankiller today.  As the Cherokee Nation’s first female chief, she transformed the Nation-to-Nation relationship between the Cherokee Nation and the Federal Government, and served as an inspiration to women in Indian Country and across America.  A recipient of the Presidential Medal of Freedom, she was recognized for her vision and commitment to a brighter future for all Americans.  Her legacy will continue to encourage and motivate all who carry on her work. Michelle and I offer our condolences to Wilma’s family, especially her husband Charlie and two daughters, Gina and Felicia, as well as the Cherokee Nation and all those who knew her and were touched by her good works.”

Secretary of the Interior Ken Salazar said, “On behalf of all Interior employees, and especially those in Indian Affairs who knew and worked with Wilma, I want to extend our heartfelt sympathy and prayers to her family for their comfort and peace.  Throughout her long career of advocating the best for her people, and all of Indian Country, Wilma was a shining example of courage and leadership for all Americans.  We will miss her dearly, but we know that her spirit and example live on, encouraging all American Indians to stand up for what they believe in and to step up and accept the challenge of serving in leadership roles.”

Assistant Secretary – Indian Affairs Larry Echo Hawk commented, “The news of Wilma’s passing has deeply touched all of us here at Interior and throughout Indian Country who knew her as a leader, friend or colleague.  She willingly reached out beyond her tribal community and Indian Country in search of solutions to the social and economic challenges facing the Cherokee people, while sharing her knowledge and insights with anyone who needed them.  We honor her with our gratitude for all she has contributed in service to her people and to Indian Country.”

“Her personal experiences in childhood of the economic struggles of her family and the impact of the federal government’s relocation policy on her life led to insights into what should be done, and could be done, to improve the lives of all Indian people,” Echo Hawk said. “On behalf of all Indian Affairs employees, I want to extend our deepest sympathies and condolences.”

Mankiller requested that any gifts in her honor be made as donations to One Fire Development Corporation, a non-profit dedicated to advancing Native American communities though economic development, and to valuing the wisdom that exists within each of the diverse tribal communities around the world.  Tax deductible donations can be made at www.wilmamankiller.com as well as www.onefiredevelopment.org.   The mailing address for One Fire Development Corporation is 1220 Southmore  Houston, TX 77004. Her memorial service will be Saturday at 11 a.m. at the Cherokee Nation Cultural Grounds in Tahlequah.