Harrah’s Cherokee Tower III was officially topped off on Friday 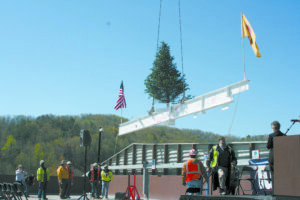 The final beam of Harrah’s Cherokee Casino Hotel Tower III is raised to be set in place during a topping-off ceremony for the structure on Friday, April 9. (Photos by Scott McKie B.P./One Feather)

In a tradition dating back hundreds of years, an evergreen tree was attached to the final beam of the third tower at Harrah’s Cherokee Casino Hotel and it was lifted into place during a topping-out ceremony on Friday, April 9.

Nine months after the groundbreaking, the final beam was attached atop the 21-story structure that is scheduled to open in late December.   Prior to the final attachment, EBCI tribal elder Jerry Wolfe blessed the building and prayed for the safety of the workers and employees.

Principal Chief Michell Hicks thanked the people involved in the project including Tribal Council, TCGE Board, Tribal Gaming Commission, Harrah’s Cherokee staff, and Turner Construction staff and commented, “As we continue to watch the progress the Tribe is making, it makes me very proud to know that what we’re seeing here will affect many, many future generations.  One thing that I’m most proud of here today in Cherokee is we’ve got a lot of experience here and we’ve got a lot of intelligence.” 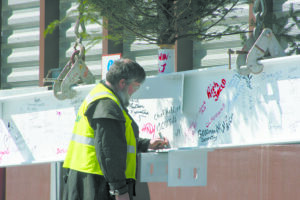 Bobby Fay, Turner Construction interim project general superintendent, said that the construction is due to be completed for a ribbon cutting eight months and 11 days from the topping off on Friday which would make it set for Dec. 20.

“We’ve reached a point where the building goes no taller,” said Fay.  “We have topped out – topped off a structure that will be the tallest from Atlanta to Charleston, W. Va., between Knoxville and Asheville, a masterpiece in the mountains.”

Norma Moss, TCGE chairperson, related, “Take a good look around you today because our masterpiece in the mountains is becoming a reality.”
She related that the third tower will double the number of rooms available to guests and will make the hotel the largest in North Carolina and South Carolina.

“This is truly an exciting time for the Eastern Band of the Cherokee Nation,” said Moss.  “This expansion is an investment in our future – an investment that will grow our business to bring new opportunity to the Tribe and to its members and to all of our employees from throughout this region who have served us so faithfully.”

During Friday’s event, Chief Hicks, in conjunction with Ken Leach, Turner Construction executive vice president, announced a new foundation aimed at helping children stricken with cancer.  The Madison Hornbuckle Cancer Foundation for Children, named for the late Madison Hornbuckle – an EBCI tribal member who recently passed away from cancer, will be a joint venture between the Eastern Band of Cherokee Indians and Turner Construction.

Chief Hicks said Hornbuckle had an “unbelievable impact” on the Cherokee community.  “Her strength is one that you don’t find in many 11 years olds.”