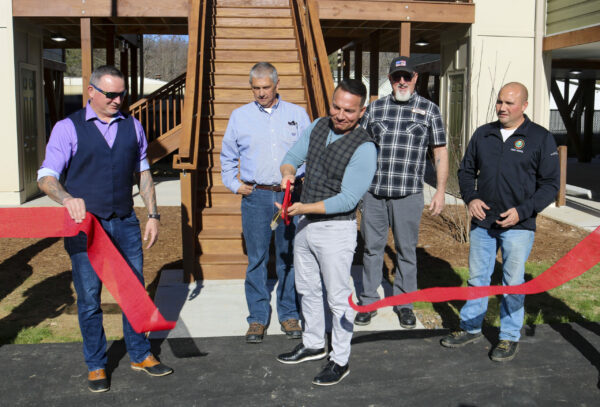 CHEROKEE, N.C. – Tribal officials of the Eastern Band of Cherokee Indians (EBCI) had a ribbon cutting ceremony for the grand opening of the Chief Flying Squirrel Village on the afternoon of Tuesday, Nov. 30.  The housing development is located off of Acquoni Road in the Yellowhill Community.

“As you can see, the project turned out just beautifully,” Principal Chief Richard G. Sneed said of the development named for Flying Squirrel (aka Salonitah) who served as EBCI Principal Chief from 1870-75.  “It looks great.” 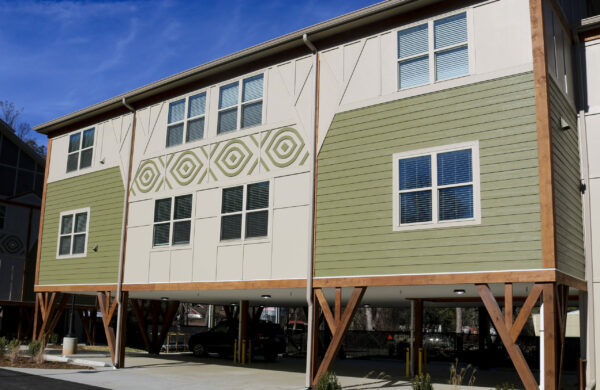 The design on the buildings comes from stamped pottery that was found at the site during archaeology work in the summer of 2020.

He praised the design of the development which includes two of the buildings having balconies for the units that overlook the Oconaluftee River.  “I think it was great to take these units here and face them towards the river and actually have access.  If you look at the design of town in years past, we didn’t incorporate the river.  If you look at the way shops were laid out, the river wasn’t tied into it.  Yet, everything we do as a people is tied to the water.  So, excellent work on the design.  The design on the units themselves looks beautiful.”

The development contains 32 total units – 16 two-bedroom units and 16 three-bedroom units.  According to Edwin Taylor, EBCI Secretary of Housing, 24 of the units have been leased with the tenants ready to move into their homes in a few weeks.  Paperwork is being finalized now for the other eight units.  Taylor related that a waiting list was established and the lessees were chosen lottery style using a computer program.

Michael O’Brien was the architect for the project, and Garanco, Inc., based out of Pilot Mountain, N.C., was the general contractor.

Chief Sneed noted, “The most important part is that we’re putting Cherokee families in homes, and that’s what matters most.”

He went on to thank Secretary Taylor and the staff at the Cherokee Indian Housing Division.  “I know you guys are getting it done every day, and I appreciate what you do…in the last two years, we’ve put more Cherokee families into homes than in the last decade combined.”

Vice Chief Alan B. Ensley spoke on the design of the project which has the units raised above the ground in a stilt-like fashion.  “When we started this project years ago, it was in the floodway and we came up with this design.  We all go to the beach on vacation and you see how it’s built there.  I’ve taken a lot of criticism over the design myself, along with everyone else, but I really like it.  With the terrain that we live in, we’ve got to learn to adapt and build with what we’ve got to build on.” 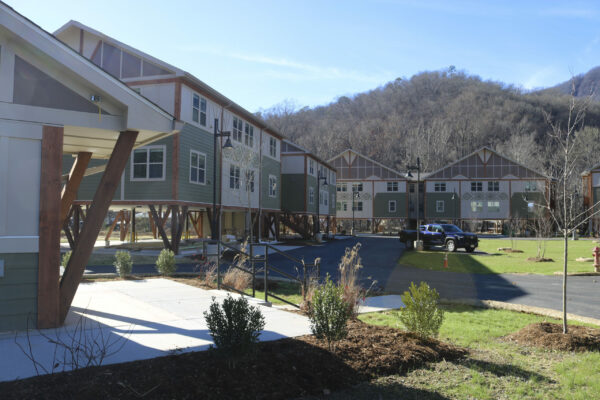 He also praised the efforts of the CIHD staff.  “I’d like to commend them for designing such a pretty project…I do think it’s a great project, great location.”

Chief Sneed added, “With building them up on the stilts, look at all of the room we’ve created for parking too, and we’re not having to use all of the flat space.”

The design on the side of the buildings comes from Cherokee stamped pottery that was found at the site during archaeology work in the summer of 2020.  A Cherokee sweat lodge structure was also found during this process.

At the time, Brian Burgess, EBCI Tribal Historic Preservation Office senior archaeologist, told the One Feather, “I am not familiar with any potential sweat lodge feature in the area that is comparable to this.  We just don’t encounter these often.”

The excavated area was covered up to be protected.