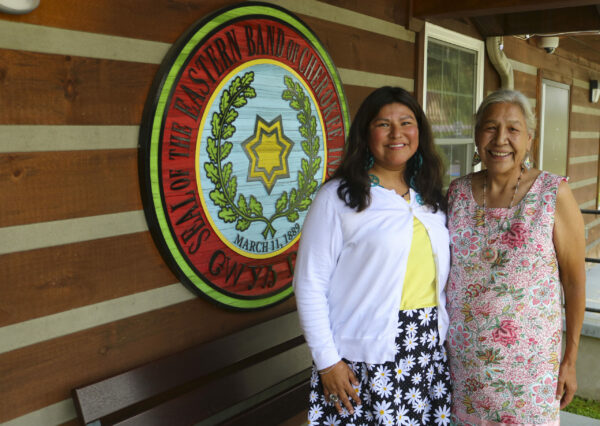 Lavita Hill and Mary “Missy” Crowe, both members of the Eastern Band of Cherokee Indians, have been awarded a 2022 Dogwood Award by North Carolina Attorney General Josh Stein. They are shown outside the Tribal Council House immediately following Tribal Council’s passage of their resolution on Thursday, July 14 that gives support from the Eastern Band of Cherokee Indians for their idea to change the name of Clingman’s Dome to Kuwohi – the original Cherokee term for the place. (SCOTT MCKIE B.P./One Feather photo)

Two Cherokee women are among the 2022 recipients of the Dogwood Award given annually by the North Carolina Attorney General’s Office.  Mary “Missy” Crowe and Lavita Hill, both members of the Eastern Band of Cherokee Indians, are being honored for leading the charge to restore the name of the area in the Great Smoky Mountains National Park called Clingman’s Dome to Kuwohi which means “mulberry place” in the Cherokee language. 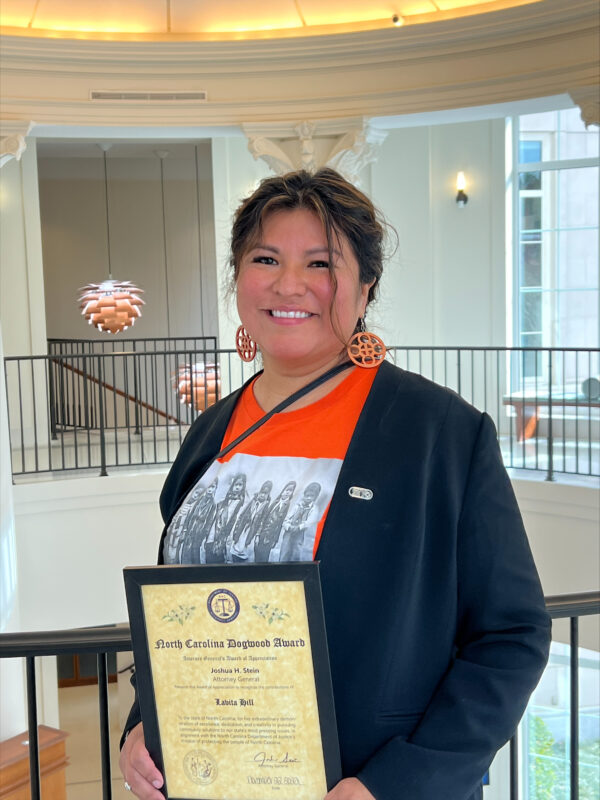 Lavita Hill is shown with her award following a presentation event on Tuesday, Nov. 22. (Photo contributed)

“Lavita and Mary are working to make sure that their tribe’s history is recognized and honored,” N.C. Attorney General Josh Stein said in a statement. “They are advocating to restore the name Kuwohi, which means Mulberry Place, from Clingman’s Dome, which was named for a Confederate general.  In doing so, their efforts will help to commemorate the long history of the Eastern Band of Cherokee in North Carolina.”

Hill received her award during a presentation on Nov. 22.  Crowe was unable to attend that event but will receive hers in January 2023.

On receiving the award, Hill noted, “This is incredibly exciting! It is rewarding that Josh Stein, the Attorney General for the State of North Carolina, is recognizing our efforts to restore the original Cherokee name, Kuwohi, to the mountain presently called Clingman’s Dome.  Mary Crowe and I were two out of 38 people from all around North Carolina to receive a Dogwood Award this year.  This is an educational opportunity that we’re taking to tell people our story, share our history, and celebrate our language. This award isn’t about me and Mary, but about our ancestors that fought to keep us in Western North Carolina and protected our Cherokee language.”

She added, “We know that our work continues to gain momentum with officials in North Carolina, Tennessee and Washington, DC.   I had the opportunity to talk with leaders from around North Carolina who are very interested in our efforts and supportive of what we’re doing. We are confident and hopeful that Kuwohi will be approved.”

Attorney General Stein, who created the awards in 2017, said, “The Dogwood Awards present an opportunity to recognized how giving and impressive so many North Carolinians are.  This year’s honorees represent the best of us.  They dedicate so much of their time to helping their neighbors and their communities.  I’m grateful for their service to North Carolina, and it’s my privilege to honor them.”

The two Cherokee women started the movement over the summer, and Tribal Council passed legislation supporting the idea in July.

Following passage of that legislation, Hill told the One Feather, “Here’s our chance to honor our ancestors.  Maybe we can’t take the land back, but we’re going to put the language out there and we’re going to put education out there and more people are going to know that this was Cherokee homeland.  Let’s honor them.  Let’s give them this name.  Let’s respect them in that regard.”

Other area communities have lent their support to the effort started by Crowe and Hill including Swain County, the City of Asheville, the Town of Murphy, and others.

Crowe has spoken about the historical and cultural significance of Kuwohi.  In July, she noted, “In understanding who we are, knowing that not only is this spiritual, it’s historic, and it’s a fact today when we have our sister tribe, the United Keetoowah Band, that comes from this.  What I had always heard in the stories is that they picked up the fire from medicine men that met up at what they referred to as Kuwohi.”