ASHLAND, Ky. – In October, representatives from the Eastern Band of Cherokee Indians (EBCI) made their way to eastern Kentucky for the groundbreaking of a new horse racing facility.

This project is being led by EBCI Holdings and is a joint venture with Revolutionary Racing, LLC, a company that specializes in horse racing facilities. The total investment for this project is $55 million, with $25 million of that coming from the EBCI. The funding for this project was approved in April of this year when Tribal Council approved Res. No. 245. That investment translates to a 48 percent equity stake in the entire business. 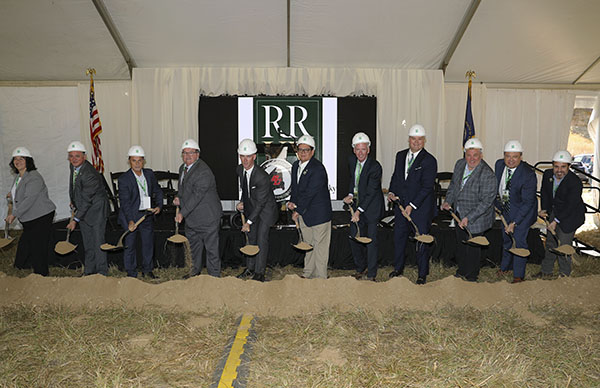 Cory Blankenship, secretary of EBCI Treasury and EBCI Holdings board member, said that they hope to have the first aspect of the project online by the third quarter of 2023.

“In Kentucky there were nine race track licenses. You have to be a licensed operator through the Kentucky Racing Commission in order to own and operate a race track in Kentucky. Only eight of the licensees were active. So, this group went to the state of Kentucky and the Kentucky Racing Gaming Commission and said that we would like to be awarded that ninth and final license for a racing facility,” said Secretary Blankenship.

The reason for the joint venture is a matter of expertise. The EBCI wanted a company that has experience for horse racing management and operation. Revolutionary Racing wanted a partner that had experience with gaming, and that’s because of a law that allows gaming similar to Class II.

“The interesting thing about operating in the state of Kentucky is that if you own and operate a track, you are also allowed to operate units that are called HHR, historical horse racing units. The technology has evolved in these units that they look and feel just like a slot machine. They look and feel just like a Class II slot machine and have a lot of the same names as Class II slot machines. They’re manufactured by the same company.”

Secretary Blankenship said that understanding the system can be complicated, but the function of the machines is relatively simple. He walked through how they operate and why they’re legal.

“The nuance of an HHR machine is that when you sit down at one of these machines and place a bet, you’re actually betting on a series of randomly selected horse races in the background. The machine looks to a database of thousands of historical horse races, picks three horses at random, and the outcome of those races, which are run in the background of the machine with every pull and push, the outcome dictates where the reels stop. So, when you put your money in and you place a bet, you’re betting on a horse race. That’s how they’re legal in the state of Kentucky to operate these machines.”

In this joint venture, equity is split from the entire operation. However, EBCI Holdings will be responsible for managing the HHR facility, and Revolutionary Racing will be responsible for the horse track. The full stake breakdown shows that Revolutionary Racing holds 51 percent of the venture, EBCI Holdings has 48 percent, and Keeneland Association Inc. holds the final 1 percent. Keeneland, based in Lexington, Ky, is an equine business that owns a race course, racing facility, and operates in horse sales and auctions.

Larry Lucas, chairman of Revolutionary Gaming, said that he is very excited to get this partnership underway.

“We’ve done other joint ventures and we’re very excited about this one. The expertise that we have in the racing industry and the expertise that [EBCI] has in the gaming side. They have one of the most successful casinos in the United States. So, we want to build off both of our strengths,” said Lucas.

A key piece of the project is that both parties wanted to establish a unique experience in the Kentucky horse racing game. The original code name for the venture was ‘Project Thoroughbred’, since they knew it would involve horse racing in Kentucky. However, they realized that thoroughbred racing seemed saturated in the commonwealth. The eight other racetracks are all dedicated to thoroughbred racing. That is why they have decided to feature quarter horse racing.

“Right now, there’s over 30,000 quarter horses in the commonwealth of Kentucky. There’s a circuit of racing from Indiana, New Mexico, Oklahoma, Texas, that migrates out here in the spring. We plan on capturing that. It’s an underserved market. Because we will be the only dedicated quarter horse track in the commonwealth. It’s kind of a niche that nobody’s focused on,” said Lucas.

Lucas said that his business has put an impetus on learning about the local community and hopes to help reestablish Ashland and Boyd County.

“Don’t be the guys from out of town that know everything. That’s really important to us. We’ve spent a lot more time listening than talking. Nobody likes the fancy guys coming in from out of town and telling them what to do.”

He continued by saying that local leaders and the trade unions have been very supportive of the effort. Lucas said that this connection to the community was a major key in partnering with EBCI Holdings as well.

“The professionalism, in this case, is greater than any other commercial entity. But I think there’s a greater sensitivity to making sure that the employees are treated correctly and that there is a greater sense of community than a big corporation. That really sits very well with me because I feel very strongly that you’ve got to be part of the community. I could repeat it a thousand times, but that’s really important to me.”

Secretary Blankenship said that part of upholding that promise from their side is ensuring a top-tier operation and facility.

“We’ve committed to a first-class gaming facility. I think that’s where EBCI Holdings wants to operate. For Eastern Band of Cherokee Indians, if we’re making that kind of investment, we want it to be first-class. That’s how we’re known in the industry and that’s where we want the project to eventually land. That’s what we made in the commitment to Boyd County. That you’re going to have a top-rate facility.”

Both Lucas and Secretary Blankenship pointed to the importance of the HHR facilities in this project. Lucas said that since implementing this type of gaming, purses for horse racing in Kentucky have doubled.

When it comes to profit, Secretary Blankenship said that EBCI Holding is projecting an 8-16 percent annual return on equity once all aspects of the project are online. He said that they’re hoping for $2.5 million in year one, and upwards of $4 million to $5 million in returns following that.

The tax structure for Kentucky is much different for this operation that it is for any other commercial gaming piece the Tribe is involved in.

“Kentucky’s current tax on HHR slot machines is 1.5 percent of the handle, which refers to the amount that is bet on these machines. That translates into approximately only 18 percent of the gross commission, which refers to the industry’s income after paying out winnings to bettors, and is the common way that states characterize their taxes on this form of gambling. That 18 percent is then split into two streams: about 10 percent goes back to the industry to support purses, breeding and equine-related programs, and only about 8 percent to Kentucky’s General Fund,” said Secretary Blankenship.

For those interested in the specific data provided by the Kentucky Horse Racing Commission, they offer monthly reports at https://khrc.ky.gov/.

Secretary Blankenship said that the numbers are not as grand as those that will come from the casino operations that EBCI Holdings is becoming involved with, but that it is a great opportunity for the Tribe to grow and diversify.

Secretary Blankenship said that they are trying to look at this opportunity from all angles. That being the case, there are plans for yet another piece of business with this project.

“Once your primary site is open, your license gives you access to a secondary site. It can be within 60 miles of your original license site. So, we’ll actually be able to open a second location,” said Secretary Blankenship.

Both partners said that they are interested in this second location, but details have not yet been confirmed. Secretary Blankenship hinted that they could consider another partnership or even an acquisition with one of the other eight ventures in Kentucky. Regardless of how a deal gets done, a second HHR facility is expected.

The first HHR facility plans to open in the second half of next year. Blankenship said that they are planning on the third quarter of 2023 and no later than the final quarter. The first races on the track are expected to take place in 2024. There are no timelines for a potential second HHR facility at this time.