Chief Neadeau and other department heads offered an update to the Commission in their two-hour meeting. She handed out a monthly report as well as updates on staffing and other issues in the department.

Neadeau was happy to say that the CIPD was fully staffed for patrol officers for the first time in several years. However, there are 15 vacant positions across all departments that they are looking to hire. Several of these are close to being filled or are new roles. 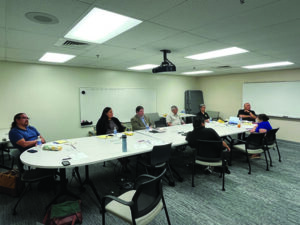 “Traffic enforcement has two positions that I’m kind of leaving open because they’re changing the job descriptions. Because we’re making a community response team. So, that’s what they’re going to be doing. They will be full-time doing that position. My plan was to turn those into patrol positions and just have our patrol officers an opportunity to rotate out doing that so that they’re not just doing that all the time. We were going to do it quarterly. But we didn’t have any interest from patrol,” said Neadeau.

She said this Community Action Team (CAT) is a priority of hers. Another was resetting the narcotics team.

“I have started the narcotics team back up. They started this week. We have two investigators that are doing that right now…They started doing their surveillance on Monday (July 18).”

Neadeau said that there have been several new positions added to the CIPD, and there are more coming. One that will help her role significantly is the Assistant Chief of Police position that she is working with Executive to create.

She also said that she was meeting with Chris Greene, of EBCI (Eastern Band of Cherokee Indians) Project Management, to discuss the development of a new evidence building. Commissioner Anita Lossiah asked that the Police Chief stay connected to the grants department to make sure everything would work smoothly with the Coordinated Tribal Assistance Solicitation (CTAS) Grant.

“They’re having issues with the evidence building right now. It’s leaking into the vault over there. Facilities has told them that they can’t work on it because it’s a historical building … it used to be the old AG’s office by the fairgrounds. They said because of that rock work it’s considered a historical building,” said Chief Neadeau.

Former Police Chief Josh Taylor, who is back with EBCI Alcohol Law Enforcement (ALE), was another large part of the meeting. He began by addressing his return.

“As we all know, in Cherokee when the Chief of Police changes, it’s usually turmoil. It’s usually against their wishes. There’s a lot of rumors, guys. I didn’t get fired. I worked my two-week notice…we had a turnover that’s been positive. We still talk a lot, and (Neadeau) is not in this by herself,” said Taylor.

“A lot of people who don’t know me thought it was odd that I wanted to go back to ALE so bad. The people who know me know that I was there from the beginning in 2009 and 2010, and I loved to watch it grow.”

With Taylor in the meeting was Justin Wade, who took over the helm of Tribal ALE when Taylor initially accepted the role of Police Chief in 2021. The two will operate as the leaders of the ALE program.

“Justin’s going to be running the day shift program…I’m going to be running nighttime operations. We’ll be concentrating more on drugs and prostitution. Justin will be more on the admin side. We’ve got our ABC liquor store and the permits,” said Taylor.

Cody White, lead tribal prosecutor, was also in attendance to provide a report. He gave an update on the data migration to TribaLex and spoke about some of the national cases involving Indian country. He also had a staff update for the prosecutor’s office.

“We are in the final stage of trying to hire our third prosecutor…we’re also in the process of getting HR’s approval for our victim advocate position. Given the Victim Rights Act that came in, we’ve submitted our proposed job description. We just have to wait on HR to sign off on that. We’ll be asking Council in the budget session to fund that victim advocate position.”

In the final announcements for the meeting, Commissioner Lossiah also gave an update on the Overdose Map project that the Tribe has been implementing in recent years.

“We were awarded $150,000 more to go towards building capacity in our jail at the MAT program. Carla, Bonnie (Claxton), and I were able to go and do a tour of the detention center in Buncombe County to see how their program is run. We’re looking at their example to use this money for our detention center,” said Lossiah.

The next meeting of the Police Commission is set for Thursday, Aug. 11 at noon. The Commission gathers monthly and has been meeting in the large conference room at the Ginger Lynn Welch Complex. These sessions are open to tribal members until the Commission moves into an executive session.