The Hills are alive with the signs of music

At just 15 years old, Noqwisi Crowe is one of the veteran members of the “Unto These Hills” production in Cherokee.

Crowe, a member of the Eastern Band of Cherokee Indians, is the sign language interpreter for the preshow of the drama. She can be seen behind the singers and musicians, offering the lyrics to those that might be difficult of hearing. This is a role she has been happily accepting for the last two years. 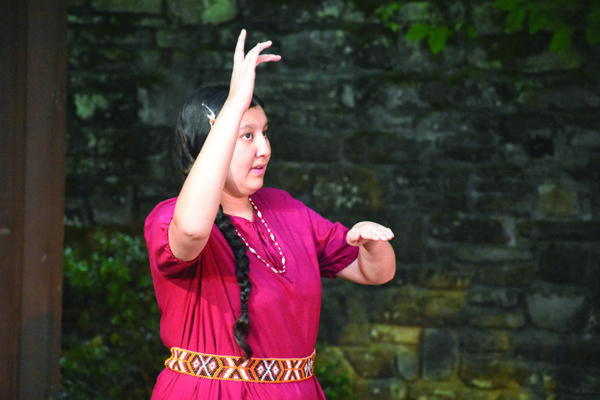 Noqwisi Crowe performing during the Unto These Hills preshow on Tuesday, July 5. Crowe has been interpreting for the show since she was nine years old. (JONAH LOSSIAH/One Feather photo)

Sign language is something that Crowe began to pick up in 2016 thanks to a visitor one fateful season.

“My mentor, Lindsey Hughes, she was visiting our church. She told me that she saw how mature I was, and I was only nine. She taught me. First, it was dramatic sign, so I did that for a few years. Now I work with Pastor Rebekah Dove. She teaches me sign language. Everyone has seen it as a wonderful thing that I do. So, I think I’ll continue with that.”

Crowe describes herself as a shy person, but her performance is something she does relaxed and with a smile on her face. She said that years of practice in front of people has calmed her down on stage. She remembers the anxious feelings the first time she got up to perform.

“I was really nervous at that time. But after a few days, I got used to it … It’s just routine now. I’ve gotten used to performing.”

Something she noticed as she began working with sign language is that she needed her own style. Whether it be her rhythm or how she accentuates certain words or phrases.

“People have different ways of performing and ways that they think about what they’re going to do.”

Crowe said that this is especially true because she is interpreting music. She said that she does her best to translate the emotion and feel of the music as well. Pastor Rebekah Dove, Crowe’s current mentor, said that conveying those aspects of language is one of the most difficult aspects of sign.

“Sign language is very basic. It’s root words. In human languages, we embellish words, and you have to constantly think, what is the root word? What are they saying? What is way to do I need to portray this word?” said Dove.

Music and sign language have always been hand-in-hand with Crowe’s path to learning. Dove, who works with The Mission church in Bryson City, has done her part in adding to Crowe’s catalog.

“She’s a quiet person when you talk to her. She’s really interested in learning sign language. She’s really graceful with what she does. I have enjoyed teaching her every song that I have worked with her.”

Dove said that Crowe is a very easy-going student and a joy to work with. She’s said that she’s excited to see how the 15-year-old continues to grow with sign.

“She just amazes me. She undervalues herself. But when you break that shell and work with her, she is able to accomplish extraordinary things…She’s able to sign in front of people and not be discouraged. Feel confident.”

Crowe said that she feels lucky to have someone like Dove in her corner. Without people to practice with, learning sign can be very difficult.

“They think I’m doing very well. That I’ve grown into it. I love doing it. Any time they want to teach me something I agree.”

In that same vein, Crowe said that she feels very comfortable working at the theatre. People show her a lot of respect, and she says she enjoys seeing all the new faces and interesting actors and workers that come through the drama.

“It’s been a really good experience. How friendly everybody is and how open-armed they are. They welcomed me into the theatre.”

Crowe said that she wants to continue to build her repertoire of sign language, and she said she is also interested in using her abilities in other forms. She is happy that “Unto These Hills” has given her a public space to grow and learn to be comfortable being around so many people.

“I’m very shy but I’m still able to perform in front of people. I have the courage to show what I can do and show that I can help other people understand.”

At the end of the day, Crowe loves sign and loves the theatre. She said that if people hear her story, she just hopes that it encourages them to try something new and push themselves to do the things they love.

“If your heart tells you that you want to do it, then trust in your heart. Go have the greatest experience you’ve ever had. If that’s your passion and what you love to do, then jump and do it.”

Crowe performs with every preshow for “Unto These Hills”, which is performed at the Mountainside Theatre in Cherokee six days a week. The drama is currently playing, and this summer season runs until Aug. 20.