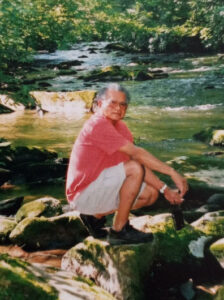 Edwin George, age 87, passed away on Thursday, June 30, 2022, at Tsali Care Center after an extended illness.

He is survived by his children, Charleston George (Bobbi) of Cherokee, Yolanda George of Cherokee, Bill Mars (Shirley), Dan Mars and Janice Mars, all of Ohio; 24 grandchildren; and 55 great-grandchildren.

Edwin was preceded in death by his wife, Ellene George; parents, Jackson George and Annie Partridge; and brothers, Eli George and Cain George. He was a well-known artist in Cherokee and Ohio.

A formal funeral service was held on Tuesday, July 5 in the chapel of Long House Funeral Home.  Brother Matthew Tooni officiated. Burial was in the George Cemetery on Adams Creek. Pallbearers were among family and friends.