“We are resilient”: Cherokee women bringing MMIW awareness with podcast

According to the U.S. Dept. of Justice, over 84 percent of American Indian/Alaska Native women have experienced violence in their lifetime and they face a murder rate 10 times the national average.  Three Cherokee women have started a podcast to bring the issue of missing and murdered Indigenous women (MMIW) to light.

Sheyahshe Littledave, Ahli-sha Stephens (“Osh”), and Maggie Jackson, all members of the Eastern Band of Cherokee Indians, have started “We Are Resilient: A MMIW True Crime Podcast” and are tackling individual cases to get the word out there. 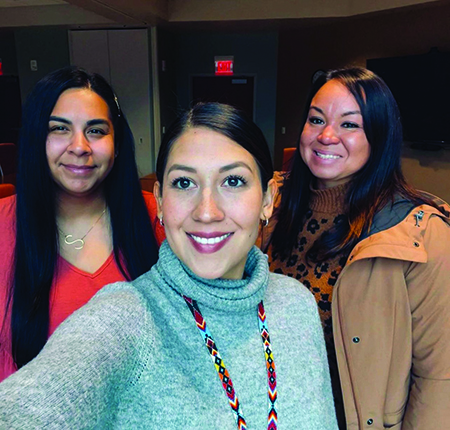 Sheyahshe Littledave, Maggie Jackson, and Ahli-sha Stephens (“Osh”), all members of the Eastern Band of Cherokee Indians, have started “We Are Resilient: A MMIW True Crime Podcast”. (Photo contributed)

“It was just after last year’s MMIW Day of Awareness in May,” Littledave said of the impetus behind the project.  “Once that day was over, the world moved on and our stolen sisters went back to being forgotten. Their cases grow cold, their cases remain unsolved and only their families and community are looking for them and fighting for justice. I started thinking about what can I do to help? Then it struck it me when I was listening to a true crime podcast one day. It was a story about an MMIW, but it was told from a non-Indigenous perspective trying to effectively communicate the barriers and struggles that Indigenous people face. I thought we need Indigenous voices so badly, and I decided to do something about it. I asked Maggie and Osh to help me co-host and ‘We Are Resilient’ was born.”

The podcast is working – the word is truly getting out there.

Littledave noted, “So far we have over 5,600 downloads in 19 countries and over 600 cities and that’s with only seven full episodes under our belt and four mini episodes. Our takeaway, that’s 5,600 times the names of our stolen sisters have been heard.”

Each of the founders has goals for the project.

Stephens adds, “We want to bring awareness to this important issue.  These women have not been given the justice they deserve in most cases and my hope is to help families get the answers they deserve or to help find their missing loved ones.  The more we share their stories and say their names it brings attention to these Indigenous women.”

Littledave said, “Our main goal is awareness. As much as the Gabby Petito case has come up still in the news, we know that there are over 700 missing Indigenous people just in Wyoming with none barely even scraping the surface to the amount of coverage that Gabby has received. Indigenous people matter. The MMIW is an epidemic that has gone on unnoticed and for far too long.”

The stories they tackle are difficult.  Episode 7 is about Ashlea Aldrich, a member of the Omaha Tribe of Nebraska.  The episode description states she “was 29 years old when her lifeless body was discovered in a field on a cold January day in 2020.  With no criminal charges or new arrests made in the connection with her death, Ashlea’s family has not given up in their fight for justice.”

That episode hit hard for Littledave.

“I think all the stories we have covered so far have impacted me in many ways,” she said.  “The last episode we released regarding Ashlea Aldrich was a tough one because it specifically focused so heavy on domestic violence.  As a domestic violence survivor and advocate, it brought up a lot of personal experiences for me.”

Another episode hit home for her.  “I would be remiss if I did not mention Brittaney Littledave. Brittaney has been missing since Sept. 5, 2021, and she is my cousin. I will tell you nothing puts the plight of families of MMIW in perspective until you realize how hard it is personally to keep your loved ones at the forefront of missing cases, because there are just so many. Sometimes, all we have is a flyer and that’s why we began to do mini episodes, because these women are more than just their missing person photo. Brittaney has struggles, but she is very much loved and has a sister that has not stopped searching, hoping, and praying for her safe return.”

Stephens was particularly moved by the story of Selena Not Afraid, a teenage member of the Crow Nation of Montana who also descends from the Nakota Nation, who went missing at a rest area in Montana on New Years’ Day 2020.  Her story was covered in Episode 2 with the episode description stating, “Her body was discovered 19 days later in a field less than one mile from the rest stop where she was last seen.”

Stephens said, “That one ripped my heart out.  She was so young, so full of life and to lose her to questionable circumstances doesn’t sit right with me.  I work with so many young ladies in Cherokee, and I see the same lifestyle and qualities in our own young Indigenous girls I saw in Selena.  She was athletic, a pow wow dancer, a horse rider, a beader, a young woman trying to help preserve her traditions that was taken too soon.”

Jackson said many of the cases have greatly affected her.  “Unfortunately, quite a few of these stories have hit home for me personally. Many of the current cases of missing Indigenous women or the unsolved cases of murdered Indigenous women are in my age group or are women who are young mothers.  The most sobering fact about many of these cases is that the suspects are people who have been in the victims lives and are typically not strangers. Studies have shown that Native Americans and Alaskan Natives are more susceptible to violence in their lifetime and tragically many of the MMIW cases involve domestic violence. Having personally been a victim of a domestic violence situation, many of these stories hit home and make me, and I think many of our listeners think, this could be me.”

She went on to say that the podcast is getting a nice response from listeners.  “I personally have received great feedback from listeners, both positive and feedback for improvement. We have been able to cover a few listener requests and that has been rewarding to know that they are tuning in and interested in getting their own stories out there. We like to remind our listeners that we are just a group of women trying to bring awareness to an issue that we are passionate about and are in no way professionals. I hope that we can continue to grow our podcast listener base and our skills as hosts so we can continue to bring awareness to MMIW cases.”

Stephens added, “The response has been overwhelmingly great.  I get compliments on how much they love to hear us share these stories.  The response ranges locally here in Cherokee to New York to Oklahoma to Oregon.  People are asking for more but with our own lives and families to raise the time is a challenge because we want to give a quality story and honor these women.  But, I promise we are bringing a lot more.”

Littledave said the podcast has been receiving a lot of support.  “I’m so incredibly humbled by it. Our main goal is awareness and at the forefront of our storytelling we work to ensure that we honor the women we are talking about, and we want their families to know that our intentions are genuine. We have had family members of the women we’ve covered reach out and comment, just so appreciative that we are helping bring awareness to these cases. In doing our research, we’ve learned that so many families are keeping these stories alive on their own, investigations grow cold, people move on. We want to help shed light on these cases.”

She summed up the project stating, “We call this project a grassroots effort, because we record, edit, run our social media, website, and research all in our own free time. We are just three Indigenous women trying to make a difference.”