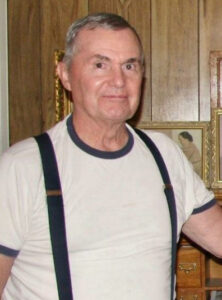 In addition to his family left to cherish his memory of many decades is his beloved, Judy Maney.

John was born in Cherokee and grew up in Norfolk, Va. He graduated from Maury High School in 1958 and he proudly served our country in the U.S. Army and the National Guard. He was sent to Miami, Fla. to invade during the Cuban Missile Crisis. Thankfully, it was resolved before he entered Cuba.

John earned his black belt in karate while he was in Norfolk. He was an excellent athlete throughout his life and later worked for the city of Norfolk as their Athletic Director at Lakewood Park for many years. In addition, he worked as a handyman at two apartment complexes. He started, coordinated, and coached the Haygood Softball League at Brook Baptist Church. John even served as a softball coach for his siblings.

When John returned to Cherokee in 1983, he worked a couple of jobs before he settled into employment with the Cherokee Boys’ Club. It was many years later he retired from this position. He loved woodworking throughout his life and in his later years, he enjoyed painting Native American images. John won many ribbons for his entries in the annual Cherokee Indian Fair and was very proud of every one. John willingly accepted the role of Guardian for his younger brother, Solomon Dane Bradley when their mother, Catherine, passed away.

John was a proud member of the Cherokee Baptist Church and invited everyone to visit the Church he loved. Although he was a private person, he knew no strangers. John was known as “One of the good guys” and was a humble servant of Cherokee Baptist Church for many decades. He prayed with many people, sharing God’s word, even while in Hospice care. He was a very generous and protective of those he loved.

A funeral service with military graveside honors provided by the American Legion Steve Youngdeer Post 143 will be held on Tuesday, Jan. 25 beginning at 2 p.m. Pastor Percy Cunningham will be officiating. The family will receive friends before the service at the graveside starting at 1:30 p.m.