Pete Peterson wants to offer Indian Country a new approach to health the best way he knows how.

He founded the Serving Love Foundation in hopes of bringing tennis to as many people as he could. A member of the Eastern Band of Cherokee Indians (EBCI), Peterson was inducted into the American Indian Athletic Hall of Fame in 2009 after a successful career at several levels of the sport. After years of honing his craft as an athlete, he said that he is ready for a much different challenge. 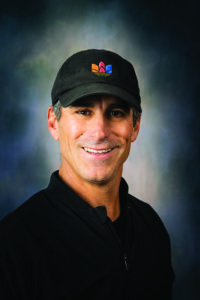 Pete Peterson, a member of the Eastern Band of Cherokee Indians and president of the Serving Love Foundation, visited Cherokee last July for his pilot program. (Photos contributed)

“It’s one thing to be a competitor and go out there and practice and play and be in control of everything. Training to make an impact on your destiny directly. After spending my life figuring out that riddle and determining how it could be thought of as easy, it feels awfully difficult being out of control of everything. Creating relationships and communicating and working together with people. There are just so many more working parts and pieces. The motivation is strong to help the kids. It’s nice to seem like it looks like it might work,” said Peterson.

Last summer, Peterson came to the Qualla Boundary to launch a pilot program for the Serving Love Foundation. He worked with locals in Cherokee as well as larger partners like the North Carolina Tennis Association (NCTA) to put on the event at the Birdtown Gym.

“Cherokee was the springboard because that was the pilot site. Since then, and I think I’m ok to say these things because these deals are in the works, but I’m pretty sure we have the Navajo Nation. 28 locations and 60 staff sort of thing. Training the staff to help train the kids, which is one of the great things that we end up doing. We’re looking to create workforce, create income streams for natives to teach the kids tennis. So, we can have both kids becoming teachers and kids becoming players. That’s really exciting,” said Peterson.

One of the locals that helped to put on the clinic was Jan Stubbs, an EBCI tribal member who played tennis at Vanderbilt University. 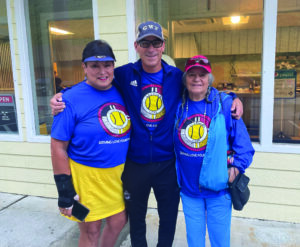 “It was very well organized. I have to give a lot of credit, too, to the North Carolina Tennis Association because they partnered with Pete. They had the first day, it was just an instruction for the people that were going to be doing the instruction to the kids. So, we went through all the drills and things to look at to help the kids and the goal of the drill. Then we had stations set up in the gym and we all performed the drills so that we knew what was expected out of that,” said Stubbs.

She said that there was a focus on positivity and learning. Stubbs said that working with Peterson that week was a joy.

“Pete’s energy level is contagious. You can see the love of the sport that he has. You can see how he wants to help people succeed…he’s just very enthusiastic and passionate about this program and about tennis.”

Stubbs says that she hopes that tennis can grow in Cherokee, whether that be through future work with Peterson or otherwise.

“Right now, unfortunately, the Boundary doesn’t have any tennis courts. The great thing about the grassroots movement is you can have a parking lot, you can have a gymnasium, just to get people introduced into the program and to tennis. It doesn’t take a lot of equipment,” said Stubbs.

She said to have some equipment and accessibility in Cherokee would be a boon to the community and encourage more outdoor activity.

“I think if the Tribe realized actually how many people used those tennis courts down at the old high school before it became a trash dumpster site, I think they would be surprised,” said Stubbs.

“It is very frustrating. Those old high school courts, I would go down there and scrape off weeds and mud and stuff just so I wouldn’t have to drive to Bryson, Sylva, or Waynesville.”

A lack of resources is something that Peterson has seen across the country, especially in Indian Country. He’s relied on building quality relationships to ensure progress with his program. Someone who has inspired Peterson is David Dantzer, founder of Standing Tall Tennis.

In the 1990s, Dantzer had been a tennis instructor on many levels for years. While at the Santa Maria Country Club in California, he felt something was missing that would make his job fulfilling.

“I sort of felt like I was unappreciated at the Club because I felt like I was babysitting the kids a lot of the time. Some of those kids didn’t even want to be there. I thought, there must be some kids out there that would really like to learn tennis,” said Dantzer.

He decided to hold a clinic with children from the Santa Ynez Band of Chumash Indians, and it didn’t take long for him to realize what his new path was.

After 12 years at the Santa Maria Country Club, Dantzer decided to pack his bags. For most of the year he was still coaching at Allan Hancock College, but suddenly his summers were completely free.

“The local Saturn dealership gave me a little car that had over 260,000 miles on it already, and I was able to load that thing up with my equipment and go around to different sites throughout the Western United States. All West of the Mississippi other than Sangana-Chippewa, which is in Michigan. I ended up over the years teaching at 35 different reservations.”

Dantzer held clinics wherever and with whatever he could.

“The other thing about being flexible is that more times than not I was not teaching on a tennis court. I was teaching on a parking lot; I was teaching in a gym. I think the weirdest one was in a cafeteria at the Navajo Nation. We busted a few lights inside,” said Dantzer.

He said that he couldn’t have been happier when Peterson called him about the Serving Love Foundation. Dantzer said that when he passed the torch for his organization, it didn’t take long for them to drop it and effectively end Standing Tall Tennis. That’s why he immediately invited Peterson to come down for a conversation and to donate whatever equipment he had.

“It’s who you know and who steps forward to help out. But with him, he’s got a very, very strong character. He will succeed, I know that. He’s highly motivated. The kids will look up to him,” said Dantzer.

“My encouragement to him is to coordinate his efforts with people that are already out there, already doing something successful. That way he doesn’t have to invent the sport and invent a new version of himself.”

This is something that Peterson has heard from many that he has talked to, and it is exactly what he wants to do.

“I’m becoming an advocate way faster than I would’ve imagined. In terms of I’m going to be able to get things done by connecting the powers-that-be so that we can have an army of people participating in this,” said Peterson.  “Instead of just me in the car pulling up and emptying out the trunk and doing tennis. Which is not a bad thing, but I can recreate myself exponentially by creating these relationships with people that are in the same business and that’s what they do. Be it the United States Tennis Association, the United States Professional Tennis Association. These organizations are big that do this. So, it’s exciting to be bringing those people together, those entities together, and those businesses together so that we can bring a real product for change and health and wellness in Native country.”

Peterson said that he would very much like to collaborate with the EBCI more as soon as possible. With the ongoing pandemic and being based out of Boise, Idaho, it has been difficult to travel and work cross-country on a consistent basis. He said that once the right relationships are in place, he wants to offer everything he can to his enrolled Tribe.

Until then, he wants to carry the momentum that he has and offer resources to every person that he can. He also insisted that he is learning more each day and that he is in love with the new path he is on.

“It’s fun to evolve into a more complete person and have a better whole focus. It’s a big change for me. A big 180 in a way. It’s exciting to grow in this direction. To truly make an impact on a community that I’m part of that could use my help.”