Cultural District plans in the works at Nikwasi Mound

The Nikwasi Initiative has the deed to the Nikwasi (sometimes called Noquisiyi) Mound in the town of Franklin and serves as the mound’s current caretakers.  They are hoping to expand educational opportunities at the site with their new Noquisiyi Cultural District site plan.

“The Nikwasi Initiative is looking to honor Noquisiyi Mound and the people of the mound.  To do that, what we’re trying to do is revitalize the triangle of land around the mound with culturally-appropriate amenities,” said Elaine Eisenbraun, Nikwasi Initiative executive director. 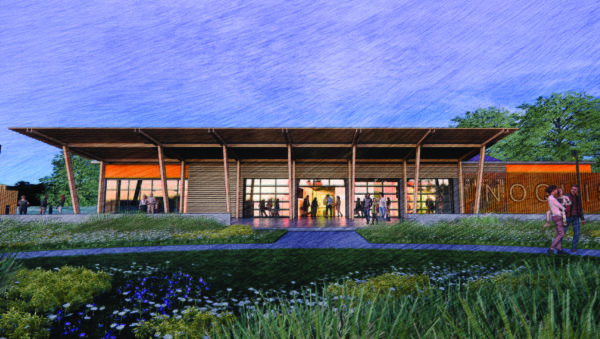 A concept rendering shows the front of the proposed Learning Center as part of the Noquisiyi Cultural District site plan. (Rendering by McMillan, Pazdan, Smith Architecture)

She said public input on what to include in the plan has been wonderful.  “We’ve had incredible success on that.  We’ve gotten a lot of EBCI members to participate and also people from Franklin.  The responses have all been super positive with a lot of good ideas.  People seem to be on the same page in general with what they want to see there.”

The Nikwasi Initiative, as joint applicants with the Eastern Band of Cherokee Indians (EBCI), is applying for a $5 million American Recovery Plan Act Funds grant through the Economic Development Administration to make the Cultural District plan come to fruition.  “So far, we have a lot of local support.  We’ve gotten letters of support from state agencies, from local entities, from non-profits, etc.  The EBCI is on board.”

Eisenbraun added, “I think this is really special because the more engagement the EBCI has, the better.  My personal goal would be to bring a new focus to the place so that when people see the place they think EBCI and not ‘old mound in Franklin’.”

“The mound has always been the focal point,” she noted.  “It’s always been about making sure that people know the history of Noquisiyi and they know our history with it, the town’s history and creating the Learning Center so people can get as much hands-on and accurate information as they possibly can.”

She went on to say, “We’re here because of this mound.  We’re here to protect it and to lift it up.”

The Equinox study addresses some of the challenges involved in the project such as parking and the ever-present question of ‘how to protect the mound?’

The study also gives the possibility of adding large boulders in the area to keep traffic accidents from running into the mound. 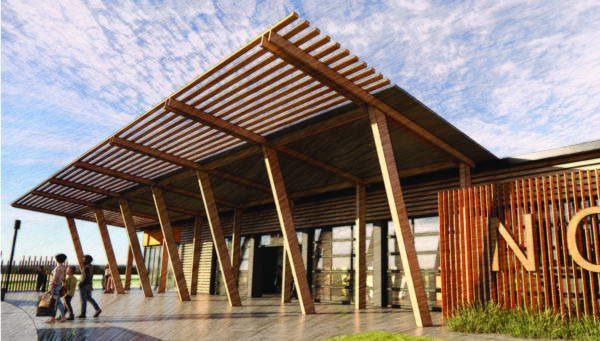 Eisenbraun added, “There’s a balancing between keeping things quiet and not letting people know and not drawing attention to sacred places and, on the other hand, like at Kituwah opening it up so that there are good people around all the time and there are a lot of eyes on it.  Our approach to this would have to follow that second pattern because we would be bringing attention to the mound for sure, but you would have that protection of having people there, having it be renowned enough that the police and other policing agencies would be really aware of how important it is.”

While the project is still in the planning and subsequently the funding phases, Wilson says their group is not underestimating any portion and is working diligently to make sure things are done well.  “This is a big project.  It’s huge, and it’s going to impact a lot.  So, we have to be careful in how we deal with partners and make sure we listen to them and the community.  We’re going to honor that mound.  We’re going to lift that mound up no matter what.  That’s the critical thing.  That’s why we’re here.”

The Nikwasi Initiative has other projects ongoing and others that they’re working on in conjunction with the Cultural District plans.  They have installed educational kiosks at the Cowee Mound in Macon County in a partnership project with the EBCI and Mainspring Conservation Trust, and they’re working on a Cherokee Cultural Corridor that will span from Cherokee to Franklin along the Little Tennessee River.

Another project is the Barbara McRae Cherokee Heritage Apple Trail which will be located along the Little Tennessee River within walking distance of the Noquisiyi Mound.  The trail, which will feature various apple varieties known to have grown in the area, is named for McRae – Nikwasi Initiative honorary eternal director who passed away in 2021.

Whatever projects are ongoing, Wilson said the Nikwasi Initiative will keep their focus and they have one important message to relate – one she said she’s heard from several Cherokee elders.

She noted, “When we talk about Cherokee history or talk about Cherokee culture, we’re not relics.  We are a living culture.  Our grandchildren are thriving.  Our people are still here.  So, we’re trying to design projects that reflect that we’re over here across the mountain and we’re doing great things.”