Ayden Kanott, a member of the Eastern Band of Cherokee Indians, has been selected to participate in the 2022 DREAM All-American Rising Stars football all-star game on Monday, Jan. 17 at AT&T Stadium in Dallas, Texas.  A total of 176 high school players were selected nationwide.

Ayden, son of Dustin and Samantha Kanott, is currently a junior at Hidden Valley High School in Grants Pass, Ore.  He started playing tackle football at age 5 with his father as head coach.

“I love the team aspect of football,” said Ayden.  “I love working alongside players that love the game just as much as I do.  I treat my team as a family, and I work hard to help my team achieve anything we put our minds to.” 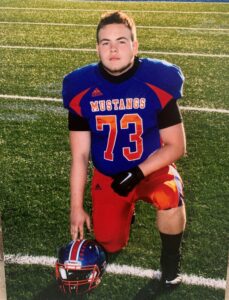 Ayden Kanott, a member of the Eastern Band of Cherokee Indians, has been selected to participate in the 2022 DREAM All-American Rising Stars football all-star game on Monday, Jan. 17 at AT&T Stadium in Dallas, Texas. (Photo contributed)

He hopes to keep playing football at the next level.  “I hope to get the chance to pursue football in college at any division.  I have been looking at many colleges in Oregon, but I am open to play anywhere in the country.  I want to go where they will let me play.”

Ayden, who is listed on his school’s official roster at 6’0” and 245lbs., is looking forward to participating in the All-American game.  “I know I won’t be as big as these other linemen I go against, but I will use my leverage, my technique, and my strength to move anyone in front of me.  I have been lifting and conditioning my body to be prepared for anything they throw at me in the game.”

Ayden was named to second team All-Skyline Conference in 2021 at both center and defensive line positions.

Shannon Riley, DREAM Sports Group chief executive officer and game committee leader, said in a statement, “The athletes that were selected have exemplified great leadership skills on and off the field, and have stood out as leading performers in each position.  We believe that these are the next stars of the game, and we want to recognize them for their outstanding achievements and help them get to the next level.”

But it’s not all football for Ayden who likes to hike and be outside.  “I love nature and try to experience every beautiful aspect of it every day.  In the future, I’d like to pursue sports medicine and become a physician to help everyone in my community.”

For more information on the game, visit www.dreambowlgame.com/tickets