Levi West, a recipient of the Jones-Bowman Leadership Award Program, recently traveled to Arizona to attend his graduation ceremony. As a Jones-Bowman fellow for the past three years, he has used his award money to further his cultural and leadership skills in areas such as making booger masks, stickball sticks, strengthening public speaking, and social networking. 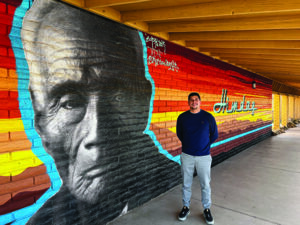 Levi West is shown in front of a mural, created by Bunky Echo-Hawk and Votan Henriquez, of the late Chief Antonio Azul. The mural is located in front of the GRIC (Gila River Indian Community) Youth Council Office in Arizona. (Photo courtesy of Ray Kinsland Leadership Institute)

Talking with Michael Preston, the Gila River Akimel O’odham/Pee-Posh Youth Council coordinator, was important to Levi as they have had great success in the past and he hopes to do the same here in Cherokee as he transitions from student to educator.

“The trip was beneficial as I was able to make an in-person connection with Michael,” said West. “Hopefully, that leads to staying in touch to bounce ideas off each other or share opportunities to better both of our programs. I learned that their members serve two-year terms and are acknowledged the rest of their lives for the work they do. They honor them when they pass away just like we do our former council members here by closing the tribe for a day. It is a huge honor and commitment to be a member of their youth council and I would like to see something similar happen with our program.”

The Jones-Bowman Leadership Award Program is under the Ray Kinsland Leadership Institute which is a department of the Cherokee Boys Club and funded by the Cherokee Preservation Foundation.