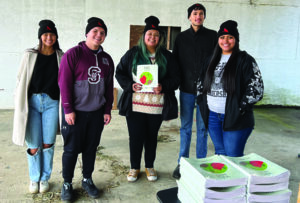 This year’s cohort of Jones-Bowman fellows decided to host a walk and read as their community service project. The walk and read was located at Kituwah mound on Sunday, Dec. 19, 2021 and featured a Cherokee Nation story written by Virginia Hamby called Totsuwa, which is how the Cardinal became red. The Fellows integrated the Cherokee Core Values of Group Harmony, Educating the Children, and Honoring the Past.

The EBCI Communications Department helped the fellows print out signs depicting and telling the story in English and a coloring book edition that featured the story entirely in Cherokee syllabary and phonetics.

On the day of the event, the fellows assembled the signs with their posts. After they were built, the fellows started to put the signs in their assigned places. Once the preparation was finished, the fellows began to talk to the guests and explain the process of the walk and read while also serving guests refreshments and handing out coloring books.

The fellows received many positive reviews during the event, and the guests were happy. After the event, the fellows deconstructed the signs, threw trash away, and cleaned the area they used. The estimated total of people who took advantage of this event was 50-75 people.

Jones-Bowman officials noted, “We would like to thank everyone that attended the event. We would also like to thank the EBCI Communications Department, Buffalotown., Johi Griffin, EBCI THPO Office, Wolftown Council Members Bo Crowe and Bill Taylor for their help to make the event a success.”

The Jones-Bowman Leadership Award Program is a fellowship and leadership program that embodies the seven Cherokee core values: Sense of Humor, Sense of Place, Spirituality, Group Harmony, Educating the Children, Honoring the Past, and Strong Individual Character. The Program is named after former Principal Chief Leon Jones and former Tribal Council Representative James Bowman, who were integral in forming the Cherokee Preservation Foundation.

New applications for the Jones-Bowman Leadership Award Program will open on Feb. 21 and close on April 4. For more information, please visit rkli.org/jones-bowman.com/ or email Christopher Reed at chris@rkli.org.