KODAK, Tenn. – Buc-ee’s and the Eastern Band of Cherokee Indians (EBCI) are officially partnering after the convenience store chain broke ground on what will be its biggest store to date.

The Texas-based company announced their plans to join the 407 Project in June, and Friday, Sept. 24 marked the next major step towards their new 74,000-square-foot facility. Jeff Nadalo, general counsel for Buc-ee’s, said that the process has been smooth since the summer announcement. 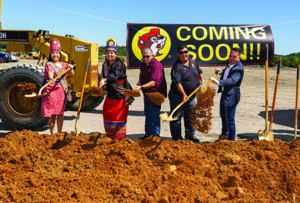 “[The EBCI] were very easy to work with. They were a pleasure to deal with. I think for us this is the first store we’ve ever done with a lease. So, I think that certainly presented our side with some unique questions and opportunities to try to work on. Just because we’re accustomed to developing our own sites. So, we had to understand the long-term objective for the site and make sure that it aligned, which it certainly does, with our goals,” said Nadalo.

He said that Buc-ee’s agreed to a deal like this because of the shared mission between the company and all the partners involved. Nadalo said that Buc-ee’s is constantly being proposed business deals and partnerships, with the vast majority of those being turned down. He said that there was a long negotiation process, but the potential of the site is significant.

“I think the site itself, as well as the long-term vision for the area. I think it made it a very comfortable fit for the family-friendly sort of experience that we try to deliver to our customers,” said Nadalo.

He said that now it’s time to get the last dealings finished so that vertical construction can truly get underway. Nadalo said that Buc-ee’s is aiming for completion by the first quarter of 2023.

“A lot of work has gone into this project to date behind the scenes. We’re hoping that in the next 3-6 months that they’ll start to see substantial activity at the site. Our stores typically take around 12 months to 16 months to complete construction. We’re hopeful that we’ll start construction very soon,” said Nadalo.

Buc-ee’s was the first domino of what the EBCI and other partners plan to be a wave of progress. Matthew Cross, chief executive officer of OE Experiences, has been heavily involved in most of negotiations of this process.

“It’s a relief. Nothing ever goes as fast as you would like, but there’s a lot of energy and excitement,” said Cross.

“We actually have two signed letters of intent that we’ll be going public with over the next two weeks. We’re expecting several more this month. We have our own internal goals and measures that we’re working towards in terms of completing Phase 1 and getting it decision-ready and revealing it to the public. Things are speeding up.”

Cross said that it was no small feat for them to land Buc-ee’s on a lease and not have to sell the rights to the parcel. He said it was a major bargaining piece, but he was impressed by the response they received from Buc-ee’s.

“I think it highlights how they’re good partners. Because they recognize how important it is that the Cherokee retains ownership of this land. That was a key philosophical point for all of their business dealings, and Buc-ee’s adapted to the constraints of the deal. Shows how much they believe in this market and this site to overcome that internal discomfort. More optimistically, it shows that they’re willing to work with the Tribe as partners,” said Cross.

The EBCI has tasked the Kituwah, LLC to handle this project. Mark Hubble, chief executive officer of the LLC, said that this was a huge step but that they are still looking forward. He said that the next major piece that will be announced for Phase 1 will be a hotel.

“That’ll be a self-developed project, probably. We are approved for a Marriot product at that location…the specific hotels that we’re looking at are the Aloft, which has been approved, and the Courtyard. That would be the one we have not determined yet,” said Hubble.

He said that the finances around the Buc-ee’s partnership is important but difficult to pin down. Hubble said that the Kituwah, LLC has put in $25 million towards infrastructure for Phase 1 of this three-phase plan. He said that while that involves the plot for Buc-ee’s, that also includes the main road, water, and electrical to all the other plots and businesses that will be encompassed in the near 70-acre development.

“We paid for the development of our property. Buc-ee’s is 100 percent paying for their build. They will invest somewhere between $35 million and $50 million in a Buc-ee’s build. We are leasing the ground to them, and we’re providing the pad site with infrastructure to that pad site. Once it hits that pad site, the rest of it is Buc-ee’s,” said Hubble.

The Kituwah, LLC will be bringing in annual revenue via the lease with Buc-ee’s and that will activate closer to the completion to the build. That lease can kick off previous to the finish demanding on construction delays.

Hubble said that there were a lot of factors when deciding how they should develop the convenience center. What made the decision a lot easier was landing their top choice as a partner.

“There’s two factors to that. One, what Buc-ee’s does, that’s not our area of expertise. We want to stick with our areas of expertise. Let people with that area of expertise do what they do better than anybody else that does that. Then the other one is what level do you trade off the risk-reward? It’s far less risky for Buc-ee’s to go and do that there than it is for us to,” said Hubble.

He said a third aspect is the power of Buc-ee’s name recognition and brand. He said that there could be more partnerships like this lease for the remaining properties at the 407 Project, but that there will most likely be a blend of development strategies.

Hubble said that they are expecting to make several new announcements in the next 30 to 60 days. He said that the main aspects to manage are coordination and timing. The hope is to spread out the announcements while also collaborating a grand opening in what is currently projected for early 2023.