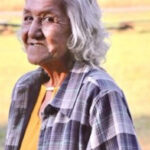 Agnes Wolfe, 68, of Cherokee, passed away on Monday, Sept. 27, 2021. She was born in Cherokee to the late Charles and Cecelia Johnson.

Agnes was a fluent speaker of the Cherokee language. She put this passion to work as a translator at New Kituwah. She loved her children, grandchildren, great-grandchildren, and family. Agnes was known for being an excellent cook with fried chicken and macaroni and cheese being some of her many specialties. In her free time, she also enjoyed watching wrestling.

A graveside service will be held on Thursday, Sept. 30 at 10 a.m. at the Johnson Family Cemetery. Pastor Harley Maney will officiate. Nephews and great nephews will serve as pallbearers. Crisp Funeral Home is assisting the Johnson/Wolfe family with arrangements.