The sport of triathlon is a tough discipline that involves swimming, cycling, and running combined into one race.  Dvdaya, Ogana, and Uweluga Swimmer and Joscelyn and Cambry Stamper, all members of the Eastern Band of Cherokee Indians, participated in the Sugar Creek Youth Triathlon in Greer, S.C. in early September. 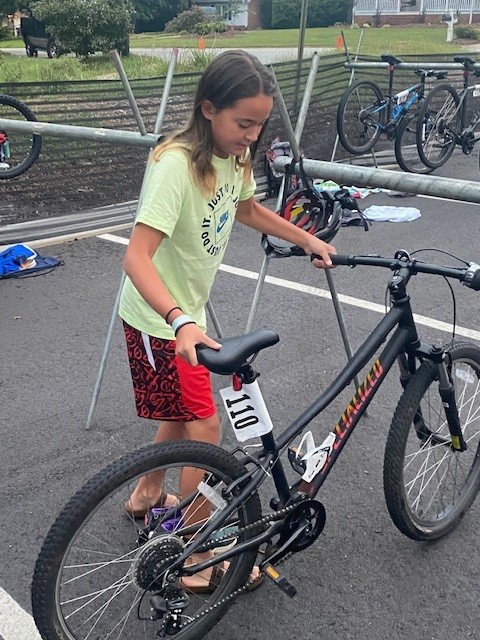 Cambry Stamper inspects her bicycle prior to the start of the Sugar Creek Youth Triathlon in Greer, S.C. in early September. She took third place in the Female 10-11 age group with a time of 30:06.7. (Photo by Miranda Stamper)

“It was hard, not going to lie,” said Dvdaya. “I struggled on swimming because I don’t usually swim often, but I do run and bike more than I swim. And, I do that a lot, I run a lot, so it wasn’t terrible. But, the swimming part hurt me really badly.”

Coming out of the water, she was 69th but worked her way up to 12th place after the cycling and took second place in the Female 14 & over division with a time of 25:27.7.  “I enjoyed it. It was fun because, going into it, we’re really athletic. So, going into it, we already kind of knew what was going to happen. But, after it finished, we knew what we had to work on, which is swimming. I was really bad at swimming.”

Her brother, Ogana, took fourth place overall and second place in the Male 12-13 division with a time of 23:09.6.  “I really like the biking part because that’s where I caught a lot of people. I sucked at swimming. In the running part I did pretty well but I started getting tired because I used up most of my energy on the biking.”

Joscelyn placed fifth in the Female 12-13 division with a time of 30:20.  She noted, “I like it because it’s very competitive. You get to bounce back and forth with people, but it’s a lot different than other sports because you use different parts of your body that you don’t usually use with other sports.”

Cambry took third place in the Female 10-11 age group with a time of 30:06.7.  She spoke to the difference in triathlons from the other sports she participates in.  “Triathlons are harder because you don’t get a break.  You can’t stop.  You don’t get any rest until you are done.”

Swimming was her favorite leg of the race.  “I’m good at swimming.  I get ahead of everyone in the swim.”

Uweluga took first place in the Male 9+Under division.  “I wasn’t really out there to win.  I was just out there to just have fun and see what place I get.”  Swimming was his favorite part as well.

Carrah Swimmer, mother to Dvdaya, Ogana, and Uweluga, stated, “They know how to ride a bike, they know how to swim, and they run daily. So, I told them that they train year-round.”

She encouraged them prior to the race.  “I told them that, mentally, they can get through it. I told them not to get too hard on themselves because it’s their first time doing it. But, physically, their bodies are able to do this. It’s going to be mentally saying, ‘I can do it’ versus ‘you’re not very good at this. Look at these people passing you up’.”

All of the youth are multi-sport athletes and are constantly moving throughout the year.  Carrah noted, “They don’t ever really get out of shape. We keep them in shape. We keep them active.  I don’t think they realize how prepared they were and I think they surprised themselves by placing so well. They went up against people who win every year. They were amazing. They had high expectations for themselves.”

Dvdaya said triathlon is fun and competitive but is quite different than other sports she participates in.  “Running cross country, you start with fresh legs. Even though you run longer, it’s done faster because you run faster. But, whenever you do the triathlon you’re starting out swimming. When I started out swimming I was dead when I finished it, so my legs were already halfway gone. Then I had to bike and it burned my legs, then we started the run. Though I ran slow, I didn’t stop and I didn’t start walking or anything. So, you run slower. I know I did.”

She also knew her strong suits and not-so-strong suits leading up to the race.  “I feel like, going into it, we’re all pretty in shape so we knew what our strong parts were and our bad parts were. We know we’re not good swimmers, but we wanted to make sure we did really well at the other stuff that we did like the biking and running.”

Each said they plan to continue with triathlon.  Dvdaya noted, “I’m going to keep running and I’m going to start riding with my Doda on the road. We just got a new road bike, so we’re going to start doing that. And we’ll start swimming. Maybe that will help us out a little bit. I was, like, 50th going out of the swim, but then I came back on the run and bike and ended up getting second.” 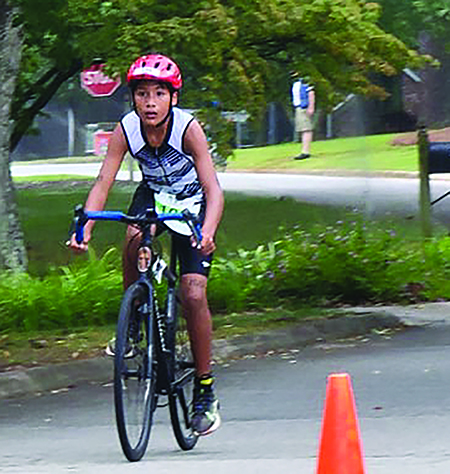 Ogana Swimmer rides hard during the cycling portion of the race. (Photo by Carrah Swimmer)

Ogana commented, “I liked it because it was tough and I was really slow on the swim but I caught everybody back on the run and the bike. But, on the run, my side started hurting.”

Joscelyn said, “I think I’ll keep doing it and maybe work on the run a little bit more. I’ve never been the fastest runner. But, just kind of work on everything a bit more and try to cut down on my time. And try to beat my little sister next time.”

Cambry also said she plans to continue in the sport.  “It’s fun and you get to train.  And, they’re fun!  And, my family cheers for me.”

Miranda Stamper, mother of Joscelyn and Cambry, said, “They’re a great group of kiddos. You ask them to do something and they’ll put in the work. We did a few rounds with Joscelyn because her biking is pretty strong so the swimming and the running were her weaker points. So, that’s the thing that we kind of worked on to get her ready.”

All of the young athletes and their mothers agree that more Cherokee youth would enjoy getting involved in the sport of triathlon and mentioned the idea of a Cherokee Triathlon Club.

“I think that it would be great,” said Miranda.  “There’s got to be some way that we can work it out to where these kids, and there’s a lot of kids that are like them, that would do it. They may not be able to travel, but if it’s right here and they have everything that they need to get ready for it right here, and it’s free, there’s no reason that we shouldn’t be able to have one and it be super successful. There are tons of athletic kids and everything that they need is down there at that Complex free to them. I think that would be an amazing addition that we could give these kids.”

Dvdaya said, “That (an organized triathlon club) would be cool! More activities would be cool around here. Like the 5k and marathon people did, that was pretty cool.”

Joscelyn added that it would be nice to see an event hosted in Cherokee, “I think that because it’s so far away, a bunch of kids from here can’t really get there. And, if we had it here, I’m sure a lot more would come out and do it.”

Cambry agreed, “We don’t have anything else to do in Cherokee.  If they had a club here, some kids would do it so they would have something to do.  I wish we did.”