The Cherokee JV Braves gained a total of 321 yards of offense while holding the Andrews JV Wildcats to only 161 during a game at Ray Kinsland Stadium on the beautiful fall evening of Thursday, Sept. 23.  The Braves took advantage of four Wildcat turnovers to take a 48-6 victory. 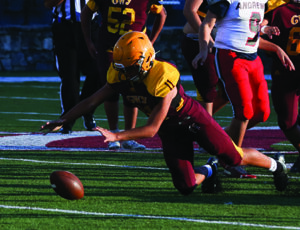 Cherokee’s Javian Garcia recovers an Andrews fumble in the first half of a game at Ray Kinsland Stadium on the evening of Thursday, Sept. 23. On the game, won by the Braves 48-6, Garcia scored two touchdowns and got two 2-point conversions. (SCOTT MCKIE B.P./One Feather photos)

Bubba Moore, Cherokee quarterback, was 4 of 8 for 38 yards and 1 INT.  Jack Teesateskie was the top receiver on the night with 2 catches for 25 yards.  Interesting fact – Moore’s interception was short-lived as Andrews fumbled the ball back to Cherokee on the same play following the pick.

Zach Seay led the way defensively for the Braves with 4.5 tackles followed by Michell Gayosso with 4 and Branden Santiago and Garcia with 3 each.  The Braves also had four fumble recoveries with Michael Randazzo, Garcia, Julius Pepion, and Seay each having one. 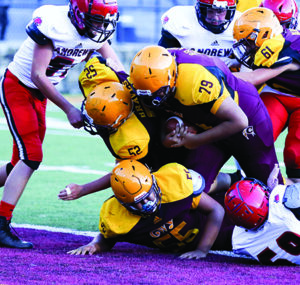 Niko Thompson (#79) barrels into the end zone for the two-point conversion following a Braves score in the second quarter.

Panther opened up the second half scoring with a big 44-yard run just four minutes into the third.  Christian Grant got the two-point conversion to give Cherokee a 32-0 lead.

Andrews got on the board with their only score of the game as Aguilar (#4, roster not available) ran for a 9-yard touchdown.  The two-point conversion failed.

Cherokee added two more scores in the fourth quarter.  At the 8:59 mark, Garcia ran 38 yards for a score and then added the two-point conversion.

He followed that up with a 2-yard run four minutes later and again ran for the two-point conversion.  This rounded out the scoring in the game, and the Braves took the win 48-6.