Tribal member acts in “Reservation Dogs” and runs a business

The television series “Reservation Dogs”, being shown on Hulu, has taken the world by storm and a member of the Eastern Band of Cherokee Indians (EBCI) is among the cast.  Kylee Robison, currently residing in Oklahoma, plays Elora Dana’s mother, Cookie, on the program which was created by Sterlin Harjo and produced by Taika Waititi. 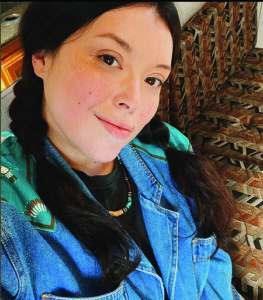 Kylee Robison, a member of the Eastern Band of Cherokee Indians with Mvskoke Creek heritage, is in the cast of the hit television series “Reservation Dogs” which is streaming currently on Hulu. (Photos contributed)

“’Reservation Dogs’ is my first ever experience working in a major production,” said Kylee.  “I’ve known Sterlin Harjo for years, and he is a good friend of mine.  I was actually weaving at my kitchen table, getting ready to launch my first website when he sent a text message asking if I wanted to be in his show.”

“The set literally felt like walking around the Fall Festival with how many Natives were walking around – Natives doing hair, make-up, behind the camera, in front of the camera.  Sterlin really did bust the door wide open for everyone.”

Kylee said that the show has increased Native representation immensely.  “I think what ‘Reservation Dogs’ is doing right now is extremely important for not only the world to see Native life but also for Natives to see ourselves.  That kind of representation creates an empirical view of empathy for the world but also helps heal our communities by creating conversations about mental health.”

She went on to say, “Representation is healing.  We, as Native people, need to tell our own stories.  My mind always goes to the children and what they see.  I want them to see themselves.  They deserve that and not what Hollywood has depicted of us.”

Kylee, who is both EBCI and Mvskoke Creek, is the daughter of Tonya Rogers-Parker, an EBCI tribal member, and Scott Robison, a member of the Mvskoke Creek Nation.  Her grandparents are Helen “Duke” Queen-Raby and Roger Raby from the Painttown Community and Margaret Robison and the late Virgil Robison from Oklahoma.

Kylee, who plays the banjo and loves photography and cooking, is also an accomplished weaver – an art skill that she learned as a child growing up in Cherokee.

“I first started weaving at age 10, attending the first two years of cultural summer school.  Louise and Butch Goings taught me everything I know about basketry.  I am very thankful for them and their knowledge.  It was a gift.” 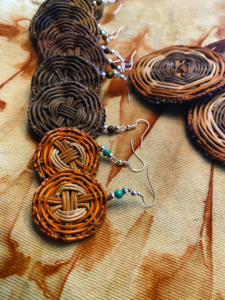 She moved to Okemah, Okla. with her family in the sixth grade but kept up with her weaving.  “My grandma Duke kept me weaving once I moved shipping me white oak splints from Cherokee and making sure I had all the materials to create.  I am extremely thankful for her.”

That love of weaving has led to Robison creating two online businesses – Root and Water where she sells Oklahoma honeysuckle earrings and woven medallion style necklaces and her Cornbread Cheeks Shop where she takes her weaving designs and turns them into woven screen print images for masks, fanny packs, totes, and wall art.

“The names of these shops are inspired by both of my grandmothers and their love,” she said.  “They modeled determination, rooted in hard work, believed in me, and both make mean cornbread.” 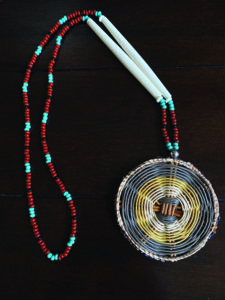 Kylee stays quite busy with her business and her newfound interest in acting.  “The notes app is my most used on my phone.  Taking care of my mental health and scheduling my life in Google calendar helps me with time management.”

You can shop online for Kylee’s artwork here: https://cornbread-cheeks.creator-spring.com and