Blues Traveler is heading to Cherokee

Famed blues rock outfit Blues Traveler will be making their way to Cherokee on Sept. 24 for a concert at Harrah’s Cherokee Casino Resort.

This show is coming towards the end of their first tour since the pandemic break, as well as to showcase their 14th studio album “Traveler’s Blues”. Chan Kinchla, the band’s guitarist, said that this album is a return to their roots. 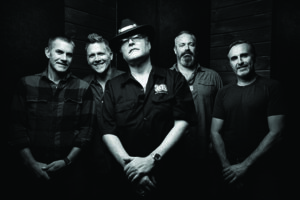 Blues Traveler will be playing at Harrah’s Cherokee Casino Resort on Friday, Sept. 24. The show is scheduled to begin at 9 p.m. Tickets are being sold online through ticketmaster.com.
(Photo by Graham Fielder)

“We had been talking about doing a blues record in some form for well over a decade. As it became more and more clear we weren’t working last year. Like everyone, we thought it’d be a month, then three months, then six months, and then surely, we’ll be out in the fall. We knew we had the space and time to go, ‘well we should do something, anything.’ Right at that time, we were talking with Round Hill Records, which has a really big blues catalog,” said Kinchla

“That’s when the idea came back to do a blues record. The band’s original name was Blues Band. When we were actually in high school, we were much more of a blues band. I mean, that’s the music we kind of started on. I think what we loved about it, is blues music is a very in-the-moment, improvisational type of music. The forms are all very similar, it’s how you play them in that moment. The intensity of it, the speed of it. You change a lot of those variables around; it really changes how a song feels. That’s what we always loved about the blues. Being a bunch of white kids from the suburbs, I think at the time we were kind of just playing at it. So, I like to say this is the blues album we always wanted to make back then but couldn’t.”

Kinchla said that it has been a joy to be back on the road. While he says that you can expect to hear the band’s hits at the shows, the new material has been well-received.

“It’s great in the shows…In our sets, it adds a whole new dimension. Because we’d gotten pretty far away from that because we love all kinds of music. We just add, add, add influences. To bring it back and play some of these songs off the record live, they go over great. It also makes some of the other stuff sound fresh and cool because you have something to juxtapose it against,” said Kinchla.

Kinchla said that the pandemic made him hit the brakes, and that he did his best to take advantage of that time off. For a man who has been consistently touring for over 30 years, a lot of that was family time.

“I spent a lot of time with my 17-year-old son in the man cave and practiced a lot of guitar like I hadn’t in a long time. When you’re doing albums or you’re doing touring, you’re practicing for that. You’re not really working so much on getting rid of some bad habits or getting some new vocabulary or figuring out some cool solos from Jimmy Page. So, I got the chance to kind of woodshed, and I think we all did.”

He said that he wasn’t sure what to expect when they started their tour in July. One of the added anxieties was questioning if any dates would be canceled out of the blue, but he said it’s been relatively smooth sailing.

The main moment of terrified excitement came with a bus crash in Indiana. Kinchla said they were driving down the interstate when he heard the rumble strip, and the next thing he knew they were down in the median gulley and smacking into the gravel turnaround area. There were some bumps and bruises, but it didn’t slow them down much.

“We’re at the end of our run. We’ve battled through a pandemic, a bus crash, and a hurricane, but we managed to hit all our shows,” said Kinchla.

He said that he’s looking forward to playing in Cherokee. While Casino shows can vary quite a bit, Kinchla said that they don’t have any kind of expectations. He said that you are often surprised on the road, and that the focus is to have a good time.

“We try to approach every show the same. Trying to be creative with the set, switch the set around a little bit. Honestly, you never know what night’s going to really pop off.”

Kinchla said that this tour has been a special one for the band, and that he is just so happy to be back out at shows. He also said that Blues Traveler don’t plan on stopping any time soon.

“It was good to recharge, I think. But I think it made us all appreciate what we get to do for a living and how grateful we are that we’ve been able to keep doing this for as long as we have … The time away makes you appreciate it that much more. So, I think it’s been a good little reset to go into the next decade of rocking out.”

Blues Traveler will be playing at Harrah’s Cherokee Casino Resort on Friday, Sept. 24. The show is scheduled to begin at 9 p.m. Tickets are being sold online through ticketmaster.com.