TAHLEQUAH, Okla. – Winners of the 26th annual Cherokee Homecoming Art Show & Sale were announced Friday, Aug. 27 during a virtual awards presentation, and a member of the Eastern Band of Cherokee Indians won two awards.  In the Emerging Artists Awards category, Alica Wildcatt took second place for a silverwork necklace entitled “Sovereign Seven”, and she won third place for a silverwork cuff entitled “Something Else”. 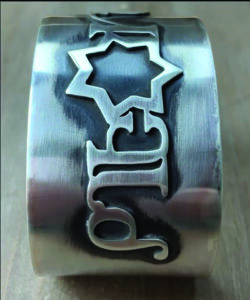 Alica Wildcatt, a member of the Eastern Band of Cherokee Indians, won third place for a silverwork cuff entitled “Something Else” at the 26th annual Cherokee Homecoming Art Show & Sale in Tahlequah, Okla. (VisitCherokeeNation photos)

In coordination with the 69th annual Cherokee National Holiday, the show and sale is being held in person at Cherokee Springs Plaza and online through Sept. 25.

The award-winning piece is constructed of wool, glass beads, a silk ribbon trim and a cotton fabric lining. It includes wool tassels, a fully beaded flap and a beaded design on its strap.

“As part of celebrating the Cherokee Syllabary Bicentennial this year, we’ve given special focus to honoring the Cherokee language during the 26th annual Cherokee Homecoming Art Show & Sale. We’ve introduced a special award and an all-Cherokee ribbon, as well as commissioned a special prize gorget featuring Sequoyah and the syllabary,” said Callie Chunestudy, culture and tourism coordinator. “In anticipation of this, many artists created entries that include the written Cherokee language. It is a wonderful component to the celebration, and I hope visitors will enjoy viewing and purchasing works that celebrate our language.”

Participating artists competed for a share of more than $15,000 in prize money in two divisions: traditional and contemporary.

The traditional division is defined as “arts originating before European contact” and consists of three categories: basketry, pottery and traditional arts.

The contemporary division is defined as “arts arising among the Cherokee after European contact” and consists of seven categories: paintings, sculpture, pottery, basketry, beadwork, jewelry and textiles.

Introduced this year, the Sequoyah Bicentennial Award is awarded to the art piece that best incorporates the Cherokee syllabary.

First-place winners in each category are as follows: 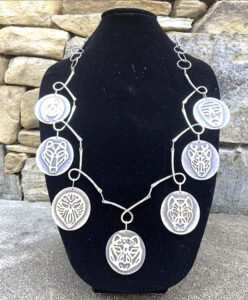 Other special awards include the following: