With a massive 560 yards of total offense, the Cherokee Braves (1-1) provided a rough sailing environment and stormy waters for the visiting Avery Co. Vikings (0-2) on the evening of Friday, Aug. 27.  The game, played at Ray Kinsland Stadium, ended with the Braves on top 39-21. 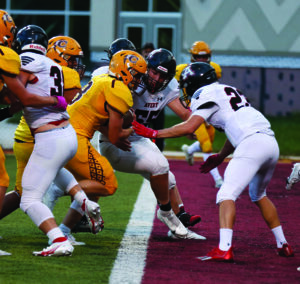 Chase Calhoun (#8), sophomore running back shown scoring in the first half, was named the Cherokee One Feather Player of the Game as named by the 104.1 WNCC radio broadcast crew. He rushed the ball 13 times for 25 yards with three touchdowns. (SCOTT MCKIE B.P./One Feather photo)

Chase Calhoun, sophomore running back, was named the Cherokee One Feather Player of the Game as named by the 104.1 WNCC radio broadcast crew.  He rushed the ball 13 times for 25 yards with three touchdowns.

Offensively, Avery Co. had one more play than Cherokee (63-62), but the Braves’ defense held them to 266 total yards.  Cherokee’s 560 were divided into 376 rushing and 184 passing.  Don Bradley, senior quarterback, was 10 of 13 passes for 184 yards, three touchdowns, and one interception.

To view or purchase photos from this game, visit: vs Avery County, August 27 – Cherokee One Feather (smugmug.com)

Cherokee opened up scoring in the game as Bradley hit Cameron Lane-Sampson on an 11-yard touchdown pass in the first quarter.  There were two touchdowns in the second quarter by Cherokee including a 3-yard run by Calhoun and a 54-yard pass to Kaden Trantham from Bradley.  Two missed point-after kicks and one two-point conversion gave the Braves a 20-0 halftime lead.

There was a lot of scoring in the fourth with both teams getting into the end zone twice.  Calhoun scored on runs of 22-yards and 24-yards.  Giarrusso scored on an 11-yard run and then he hit Gilliam again for a 55-yard pass to round out the scoring in the game.

Unfortunately, defensive individual statistics were not available by press time.

The annual Battle of the Nations game between Cherokee and Choctaw Central has been cancelled so the next game for the Braves is set for Friday, Sept. 10 at 7:30 p.m. at home vs. Rosman.