Kimberly Smith, a member of the Eastern Band of Cherokee Indians from the Yellowhill Community, was this year’s only recipient of the National President’s Award at the Virtual Leadership Summit II, hosted by the Federally Employed Women(FEW) organization. FEW is an organization that works to end sex and gender discrimination, encourage diversity for inclusion and equity in the workplace, and for the advancement and professional growth of women in the federal service. 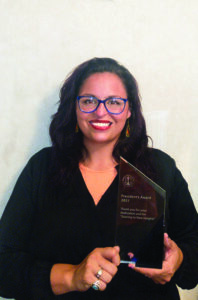 The FEW Awards Program is an integral part of the organization’s national training program hosted each summer. Recognizing the extraordinary achievements of individuals, chapters, and regions in furthering FEW’s goals, mission, and vision, the Awards program is the most popular social event of the Summit. The National President’s Award is selected and bestowed by the National President to deserving individuals who have dedicated their time, energy, and efforts towards working for the advancement of women in the government.

“When President Rainey emailed to make sure I was attending the awards program, I assumed she wanted me there to cover the event for our special edition issue,” said Smith.  “It was entirely unexpected to hear my name for the President’s Award. There are so many incredible ladies with amazing stories in FEW; I was expecting to hear one of theirs, not mine. FEW has a 50-year history of establishing and protecting workplace rights for women. I am thrilled to be a part of its legacy and its work for future generations of women. I am beyond honored to be recognized at a national level, but prouder to share this accomplishment with my community.”

Passionate about the advancement of women, Smith joined the FEW Census Women Count Chapter in 2018 while working for the US Census Bureau. In 2020, the FEW national president appointed Smith to serve on the National Board of Directors (NBOD) as the Special Assistant to the President. She supports the President with membership communications. As the Editor of the FEW national News & Views newsletters, Smith ensures the content includes timely and concise information pertinent and beneficial to FEW members national, regionally, and locally. Since her tenure in the role, Smith has evolved the newsletter to engage more with its 4,000-member audience and expanded its partnership advertising. As an NBOD member, she has been invited to speak at regional and chapter events. Recently, Tennessee Valley Authority requested Smith to serve as the keynote speaker for their annual Women Empowered luncheon during Women’s History Month.