Seventy-five years to the day, officials at Qualla Arts & Crafts Mutual, Inc. (Qualla) celebrated the start of one of the most successful Native American craft co-ops in the country.  The organization, first called Qualla Arts and Crafts, was officially started on Aug. 23, 1946 with the signing and approval of a constitution and by-laws and the election of its first officers. 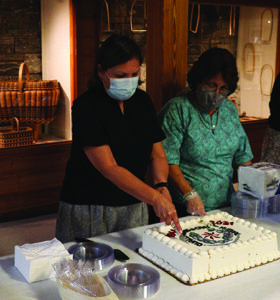 Vickie Cruz, left, Qualla Arts and Crafts Mutual, Inc. manager, cuts a cake celebrating the 75th anniversary of the organization during an event at the store on the afternoon of Monday, Aug. 23. (SCOTT MCKIE B.P./One Feather photos)

“It’s a very great honor to be here tonight,” Vickie Cruz, Qualla manager, said during a 75th anniversary event held on Tuesday, Aug. 23 (2021).  “I just want to thank the staff and everybody that’s joined in to help.  It’s just an honor to work here.”

According to information from Qualla, “In 1954, the co-op took its current name, Qualla Arts and Crafts Mutual, Inc., when it was formally incorporated under the State of North Carolina.  In 1960, the co-op moved to its present location and, in 1969, began organizing exhibitions to showcase the work of its members.  Basket weaver Eva Wolfe was the first person to have her work exhibited.”

Tonya Carroll, secretary for Cherokee Talents Board and a former Qualla employee, noted, “For all of us here, I know that the co-op holds a special place in our hearts for many different reasons. To me, it’s just a very special place in general. I think that it has kind of this magic to it to where it’s taken care of itself all of these years, 75 to be exact. And, because it’s so special, it’s going to continue to do that – to take care of itself for many more years.”

She added, “The reason that this place is so special to all of us is because of the people, like you and me, that have given our time, our love, and our effort and labor over the years to the organization, to this place in particular. We cared about it and nurtured it.”

Tinker Jenks, representing the Cherokee Preservation Foundation (CPF), said, “I’m just here to express our (CPF) gratitude to Vickie and the co-op for our long-standing partnership. About 15 or 16 years ago, among other things that we partnered on, they (Qualla) were a big piece of the puzzle for the Revitalization of Cherokee Arts and Resources program, and that program helps to ensure that artists do have resources that they need in order to make all this wonderful art.”

Jenks went on to say, “We also appreciate everything that the co-op has done for the local artisan community – whether it’s having classes to enhance skills, doing the artisan archive, or buying the local quality art. The co-op is very integral to the local community and we are just happy and grateful as a partner to be a little part of that”

Dr. Sue Abrams, a history professor at Western Carolina University, has had a long-time relationship with Qualla involving various research projects.  “I have to say that the co-op is like family to us, and has been ever since we first walked in. The people here were always very kind, very helpful. If we ever needed any information or anything about the artists they were very willing to dig for it.” 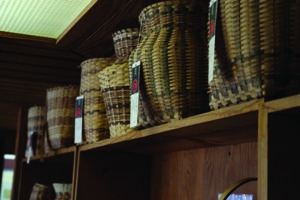 Vickie Cruz, left, Qualla Arts and Crafts Mutual, Inc. manager, cuts a cake celebrating the 75th anniversary of the organization during an event at the store on the afternoon of Monday, Aug. 23.

Her husband, Dr. Michael Abrams, aka “Doc Abrams”, noted during Thursday’s event, “The co-op is not only a business, but they also promote history, legends, and culture of the Cherokee people. And, that’s what it takes to be really recognized or beloved.”

Warren Dupree’s mother, Betty, was a long-time manager at Qualla, and his grandmother, Betty Craig, was the original secretary-treasurer elected on that first day in 1946.  “My family has been a part of this Mutual from the very beginning, and I am very proud and deeply honored to have my grandmother, whom I loved dearly, and my mother, whom I loved dearly – and I know they loved me – were a very important part of this organization.”

Elected along with Craig that first day were McKinley Ross as president and William Crowe as vice president.

Dupree said Qualla is in great hands going towards the future.  “The leadership now is beyond reproach. Vickie Cruz – outstanding leadership. When my mom and my grandmother were first part of this, it was a local community mutual. All the artists and crafters here on the Qualla Boundary could bring their works here. But, it grew to an international level and is still there. That gives great credit to all those who have been a part of this wonderful organization.  This facility is so vitally important because it gives a true and accurate description of our art history.”

Anna Fariello is an author of several books on Cherokee crafts and culture including the most recent work entitled “Crafts and Culture: Qualla Arts and Crafts Mutual (1946-2021)”.  She commented, “Here we are, 75 years later, and I’m happy that I was able to make a contribution to this great organization.”