At approximately 4:50 p.m. on Friday, Aug. 13, Cherokee Indian Police Dept. (CIPD) Officers served a search warrant at 91 Ike Tooni Road in Cherokee that led to the arrest of three individuals and the seizure of narcotics, cash, and a firearm. 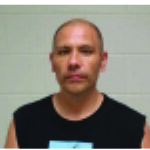 Bennie Marson Teesateskie, a 49-year-old male of Cherokee, was charged with possession of a controlled substance with the intent to manufacture, sell, or deliver.

Charles Lee Reed, a 44-year-old male, also of Cherokee, was charged with possession of a controlled substance with the intent to manufacture, sell, or deliver; violation of a domestic violence protective order; and possession of a firearm by a felon.

Tonya Michelle Taylor, a 48-year-old female of Sevierville, Tenn., was arrested on a failure to appear warrant out of Jackson County, N.C.

The following was seized during the search warrant:

“The Cherokee Indian Police Department is very proud of our narcotics division,” said CIPD Chief of Police Josh Taylor.  “Tonight, they set the standard by taking the lead with multiple divisions of our police department and Tribal Alcohol Enforcement. These arrests were a direct result of information provided by our community members about a known “dope house”. Information from the community will not be ignored, we will be knocking on more doors soon.”