When Gordon Ramsay received a lesson from Malia Crowe

Malia Crowe found herself in a familiar forest, readying for one of the most nerve-racking opportunities of her life.

Food was prepped, she had practiced her lines, and now it was time to wrangle the butterflies in her stomach. He could be here at any moment. The TV cameras had already been in place for a while, her friends were also waiting patiently. Maybe he had booked an early flight back to Cornwall? 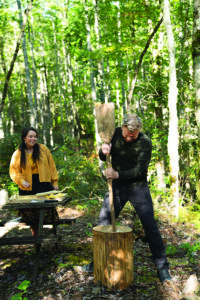 That’s when the tall and extremely present figure stepped into eyesight, with cameras and a no-nonsense director in tow. Gordon Ramsay was actually in Cherokee, North Carolina.

Not only that – he was there to learn. Ramsay is one of the most renowned chefs in the world, yet he knew almost nothing of Cherokee culture and cuisine. Crowe, a member of the Eastern Band of Cherokee Indians and a teacher at Cherokee High School, was being tasked with his education.

“Wanting to represent our people well, I kept looking back and researching words. Words that I knew. Just like, ‘how do I say that again?’ Just wanting it to be done well, because I think that that is an amazing thing – not only for Gordon Ramsay to come here to North Carolina, but for Gordon Ramsay to seek out Cherokee culture and to want to know more about it and not stop there. But, then to show the world. I think he’s teaching and sharing, and that’s what you have to do. That’s what makes it important, that’s what makes it matter.”

Crowe was on set more than two hours before filming, plenty of time to overthink the process. As soon as Ramsay arrived, it was all systems go. The intro was being shot with large TV cameras and a drone in multiple takes. The screen time with Crowe was over before she knew it.

“Oh, man. It went a lot faster than what I thought. There are times you second guess yourself. Where you’re like, ‘did I say that?’ or ‘did I say that right?’. It was all moving so fast. Because he is extremely energetic and on it. Matching expectations, I’d say it exceeded them,” said Crowe.

Ramsay tasted the three sisters stew and hominy that Crowe had prepared, and he insisted that each member of the crew do the same after shooting.

“I grew up on baked beans, that was a staple. In a tiny house, with six of us in that household. Malia’s beans – the three sisters – on a different level. The squash, the corn, and the beans. She elevated that dish into something quite luxurious,” said Ramsay.

The Michelin-starred chef said that he came into the day with a goal of focusing on the culture, as well as to see how that history has shaped the cooking process.

“For me, it’s a huge eye-opener in terms of what they constantly continued to use. How that stew is a staple. Even the ash. After that fire had gone out and dried and used to strip the outer shell of that corn…it started to make sense. You can walk through this trail and completely ignore what’s happening on these grounds. But that Cherokee history, mantra is so present today. I need to tap into that. Because if I don’t tap into that, I’m dead meat by the end of the week, trust me. It’s got me thinking,” said Ramsay.

On set with Gordon Ramsay and Malia Crowe. The filming was held in early fall 2020 on the Qualla Boundary. (JONAH LOSSIAH/One Feather photo)

He said that while he had been briefed on several aspects of Cherokee, he was desperate to experience it for himself. Earlier in shooting, Ramsay had spoken with William Dissen, executive chef and owner of The Market Place, a restaurant in Asheville.

“William told me, ‘Slow down, find out what’s going on culturally, or else you’ll trip over.’ And that Cherokee respect and resourcefulness is something that I need to have in the DNA across the final cook. And now, I just got to get up to speed with how good it is, learn the technique, tuck it away, and stay humble,” said Ramsay.

He only had a brief time to learn what he could about Cherokee. Along with the food, he picked a few words to hold onto. The Scotsman ended his camera interview in his classic fashion.

“Sgisdela. It means help, and I need a shit ton of it,” said Ramsay.

Crowe said after filming that it was an intense experience, but that she was happy with how everything panned out given the circumstances.

“Were there other things that I wish we could’ve shared about Cherokee culture? Yes, but there was no time for that. They wanted to see hominy. So, that’s what we want to show them and try to put as much of our culture in there as possible with their allowances. They said to treat him like one of my students. But I don’t know, I think I’m a nice person so it’s hard to be mean or boss somebody around. So, the joking – I can easily cut up and joke with somebody. And that is even more Cherokee culture. That’s what we do,” said Crowe.

She said she treated this as another opportunity to teach. While she was honored to be chosen for something like this, she simply wanted to represent her people and her family. The knowledge she demonstrated was shown to her by different friends and family members over the years.

“To learn and to share it. I think that’s one of the reasons why I like teaching. Because it’s awesome to become educated. That’s a very important thing. But then once you share what you know. One, you learn it better. And two, you are sending that out into the world. What do they say? An educated Indian is a dangerous Indian? It’s a very good thing. Our people have so much to offer.”

After the whirlwind, Crowe still had a bewildered look in her eyes. As she pieced together the events of the day, she started thinking about the impact of what just happened. She said that, for her, it all goes back to the willingness to learn and to teach those seeking out knowledge.

“When people want to learn, we should do all that we can accommodate and help them. Because again, it goes back to that support system, to gadugi. That even though he’s some world-renowned chef, thousands of miles away, he’s still a person that lives on planet Earth,” said Crowe.

“I will do everything in my power to get what they need or what they want to learn. I think that this is an amazing opportunity for our area to show people we’re not just the Drama (“Unto These Hills”), we’re not just this and that. Those are all wonderful things, but there’s so much more that we could be doing.”

This filming was for National Geographic’s Gordon Ramsay: Uncharted. The lesson with Crowe was part of season three, episode six: The Great Smoky Mountains, which aired in July of this year. The episode can be found on nationalgeographic.com. The filming in Cherokee was held in September 2020.