The Tribal Trout Hatchery for the Eastern Band of Cherokee Indians is about to complete phase one of renovations that supervisors say is long overdue. 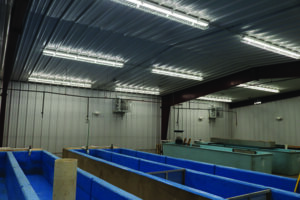 A view from inside the hatching room where the hatchery spawn their trout from eggs. (JONAH LOSSIAH/One Feather photos)

Christopher Greene, manager of Tribal Operations, said that they are planning to turn over the revamped administrative building for the hatchery in the next two weeks. The project adds 2,000 square feet to the building, and completely renovates several aspects of the operation. There is now insulation for the building, a new generator, an upgraded lab area, a basic kitchen, and more office spaces.

“The existing facilities, from my understanding, was overrun by rats. That was one of the things that really kicked this off, was to protect the rats from getting in there to the fish food, and the building was all infested,” said Greene.

“What we ended up doing with the remodel, we basically went all the way down to the skeleton everywhere…we added new skin, new insulation, new everything. So, it all got gutted and it’s basically a new building now.”

Michael LaVoie, manager of the EBCI department of agriculture and natural resources, said that each of the details of this project are a big step up. He said that the increased space and offices will help with comfort, while other enhancements will be huge assets to the early processes at the hatchery.

“One big point too, the facility includes a hatching room where we bring eggs and produce trout from egg to stockable size. The new setup allows for more biosecurity. So, we can implement stronger measures, so folks aren’t tracking in pathogens on their feet. We can set up areas where folks can decontaminate. Because those early life stages of trout are very sensitive to people bringing in any outside disease or pathogen,” said LaVoie. 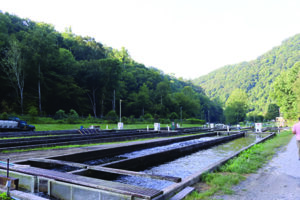 Enhancing the trout raceways will be a focus of stage two of these renovations.

Greene said that once they turn the building back over to the hatchery, that will be the end of ‘phase one’ of this overhaul project. ‘Phase two’ will be a larger endeavor. Greene said that one step is to break ground on a second hatchery, but progress has slowed on that front.

“We’re still working on finding land and property that works. We tested some wells on one piece of property. Unfortunately, it didn’t give us the flow that we needed,” said Greene.

The property mentioned is located on Whitewater Drive, behind the Hungry Bear Exxon. Considering that is no longer an option, LaVoie said they want to continue to work on what they already have.

“Right now, our primary focus is continuing to renovate this facility and ensure we have absolute maximum production here and produce the highest quality fish that we can. Ideally, we’re seeking funding and a new project to renovate our outside raceway system,” said LaVoie.

Doug Reed, supervisor of the hatchery, said that he is looking forward to moving into the remodeled facilities. He also said that these renovations were years overdue.

“The feel of the building itself is just so much better inside. It’s a lot more functioning…I think we have a good name in the fisheries, it’s time to put a good face with that name. And I think this is the first big step towards that,” said Reed.

Greene said that the keys to phase two of renovations will be acquiring funding and doing a feasibility study on exactly what improvements can be implemented. Joey Owle, secretary of the department of agriculture and natural resources, said that this opportunity could lift the hatchery to new levels. 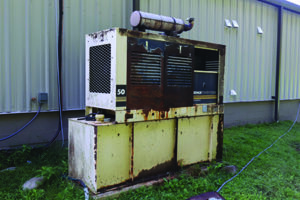 Part of the project was to purchase a new generator to replace the original one (shown) that has been there for decades.

“When we say feasibility study or assessment for this project, we’re looking at what resources we have and then what resources we need to reach our target production goal of 300,000-plus pounds. Once we assess what’s coming in for water resources, in addition to the wells that need to be drilled to get the additional water resources to get us up to that capacity, then we can say, ‘ok, now we know what we’re working with’,” said Owle.

Owle said that they currently produce approximately 215,000 pounds of trout every year. The goal for the future improvements is to allow for an increase to 325,000 pounds annually. Along with stocking, Owle said that this could open different avenues to explore.

“I put in a grant, and I didn’t receive it, but I’d like to go after another grant to look at creating a brand for trout. So that we can take a portion of that new volume of fish production that we’ll have and then take five, ten, 15,000 pounds to send a processor. Then we can put a tribally created brand on it and sell it locally,” said Owle.

In the next few weeks, employees of the hatchery will be settling into their refurbished facilities. The next steps include reopening the hatchery to the public and laying the groundwork for phase two of improvements.