Qualla Arts and Crafts Mutual, Inc. will be celebrating its anniversary with an Open Air market, an exhibition, and a new book detailing its history.  The day-long celebration will take place on Saturday, Aug. 21 from 9 a.m. to 4 p.m.  The year 2021 is the 75th anniversary of the founding of Qualla Arts and Crafts, one of the oldest Native American artisan cooperatives in the U.S. 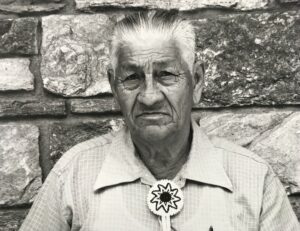 In 1946, McKinley Ross was elected to serve as president of the new Qualla Arts and Crafts Association. Photograph courtesy of the National Archives and Records Administration, Washington DC.

Originally founded as Qualla Arts and Crafts Association, the co-op formed after a series of meetings that brought together Eastern Band Cherokee craftsmen, tribal leaders, and teachers from the Cherokee Boarding School. From the start, the group focused on the economic value of forming an organization that would give artisans a “place for ready sale.” At a meeting held on Aug. 23, 1946, the group signed a Constitution and By-Laws and elected its first officers. A typed list recorded the names of 59 charter members. In 1955, the group incorporated and adopted the name it has today: Qualla Arts and Crafts Mutual, Inc.

Qualla Arts and Crafts Mutual not only saves and preserves valued objects, it likewise encourages and preserves the cultural traditions and processes that make these objects possible. The 20-old Open Air market is one event that helps these preservation efforts. The market will feature the work of a dozen artisan members who will demonstrate their craft and share their work with the public. All work will be for sale. To become a member, an individual must be a member of the Eastern Band of Cherokee Indians (EBCI). Applicants turn in an artist statement, family connections, and three samples of their work to be judged by the board of directors. Once past the preliminary round, candidates are required to demonstrate their work in person before the board. Work is judged on elements of authenticity, originality, elements of art, design, knowledge, degree of difficulty, and marketability. Currently, the co-op has over 300 members.

A new exhibit – “Reclaiming our History: Photographs from the National Archives” – features photographs collected as part of a “digital repatriation” project funded by the Cherokee Preservation Foundation in 2019. The project supported research into the collections of the Indian Arts and Crafts Board preserved by the National Archives and Records Administration in their Atlanta and Washington DC facilities. The project allowed for research into these and other repositories to find images related to EBCI artisans and for copies to be made. These and other rediscovered photographs are now in the archives of Qualla Arts and Crafts Mutual, Inc. Most have been hidden away in the National Archives for decades and have not been seen before.

Qualla Arts and Crafts Mutual commissioned scholar Anna Fariello to write a history of the cooperative. That history, now in print, will be available at the celebration. Fariello worked with the co-op on three previous books documenting Cherokee Basketry, Pottery, and Carving. The author explained her approach to writing the book that included as much factual documentation as possible.

“I’ve included many names and dates,” she wrote, “hoping to tell the full story of one of Cherokee’s most significant and cherished cultural institutions.” The book contains a chapter on the co-op’s 59 charter members. With assistance from the EBCI Enrollment Office, staff was able to verify their names, birth and death dates along with their community, and a photograph if one was available. Like the exhibition, the book showcases many of the photographs “found” at the National Archives.

In preparation for the 65th anniversary in 2011, co-op staff pulled down boxes and boxes of old records from the attic where staff found material dating back to the formation of the co-op. In the intervening years, and with grants from the Cherokee Preservation Foundation and Traveling Archivists Program, the co-op organized these records into an archive that has yielded important historical information that shed light on the events leading up to the cooperative and its first years of operation. When planning the 65th anniversary celebration, discussions centered on just what date would be best noted as the actual anniversary date of Qualla Arts and Crafts.

On Aug. 23, 1946, the group met. While Agency Superintendent Joe Jennings still presided, it was at this meeting that the Constitution and By-Laws were read “paragraph by paragraph.” It is interesting to note that, at the time—the mid 20th century—many people still spoke Cherokee as their first language. While the meeting was conducted in English, McKinley Ross translated the entire conversation into Cherokee before taking a vote.

The approved documents were signed and officers elected. Nominated without opposition, the group elected McKinley Ross as its first president. It was a close race for vice president between William Crowe and Bertha Craig, with Crowe receiving the most votes. Craig was then elected as Secretary-Treasurer.

About the co-op, pottery maker Cora Arch Wahnetah said, “It has helped me and helped my people.”

On Aug. 23, 1946, the Qualla Arts and Crafts Association was formally organized. More importantly, it was on this date that the organization came under the direction of the artisans it proposed to represent.