Principal Chief Mankiller to be featured on U.S. Quarter

The late Wilma Mankiller, the first female elected to serve as Principal Chief of the Cherokee Nation, once said, “The secret of our success is that we never, never give up.” 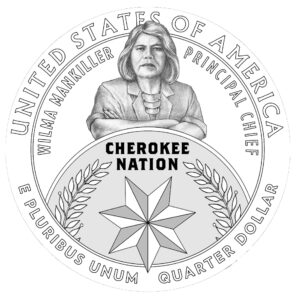 The U.S. Mint announced recently that Chief Mankiller, who passed away in April 2010, will be one of five women featured on quarters in 2022 as part of the American Women Quarter Program. Shown is one of a few designs put forth by the U.S. Mint for possible selection for the coin. (U.S. Mint image)

It was that tenacity that helped Chief Mankiller as a leader, and her can-do spirit is now being honored as she will be featured next year on a United States quarter coin.

The U.S. Mint announced recently that Chief Mankiller, who passed away in April 2010, will be one of five women featured on quarters in 2022 as part of the American Women Quarter Program including poet Maya Angelou, suffrage leader Adelina Otero-Warren, astronaut Sally Ride, and film actress Anna May Wong.

U.S. Mint Director David J. Ryder said in a statement, “Courageous women have made countless contributions throughout our great Nation’s history.  The American Women Quarters Program is a unique opportunity to honor a broad and diverse group of women whose achievements, triumphs, and legacies reflect the strength and resilience of our Nation.  We look forward to sharing their stories.”

Cherokee Nation Principal Chief Chuck Hoskin Jr. said in a statement after hearing of Chief Mankiller’s selection in the Quarter Program, “She was quite a force.  When she became Chief in the 1980s, Cherokee Nation was still trying to regain its footing from nearly a century of oppression and suppression of our government by the United States.  She was very bold in what she expected the United States to do, which was to provide resources that they were obliged to do and to get out of the way of the Cherokee Nation so that we could chart our own destiny.”

He added, “She was someone who survived in an office that had been dominated by men.  I think she sparked a generation, particularly a generation of Cherokee girls, about what was possible.”

Chief Mankiller was once quoted in a Smithsonian Magazine article stating, “I hope that when I leave, it will just be said, ‘I did what I could.’”

Chief Mankiller was previously honored by the U.S. as she received the Presidential Medal of Freedom from President Bill Clinton in January 1998.