TAHLEQUAH, Okla. – Nine Cherokee bicyclists who were part of the 2021 Remember the Removal Bike Ride finalized their 950-mile journey on Friday, June 18 with a homecoming ceremony in the capital city of the Cherokee Nation. During the trek, six cyclists from the Cherokee Nation and three from the Eastern Band of Cherokee Indians in North Carolina retraced the northern route of the Trail of Tears in honor of their ancestors who were forcefully removed from their homelands in the southeast more than 180 years ago. 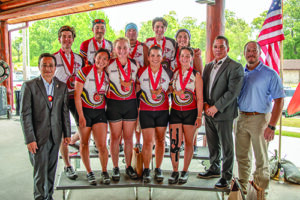 The cyclists began in New Echota, Georgia, on May 31 to begin the memorial ride and pedaled through Georgia, Tennessee, Kentucky, Illinois, Missouri, Arkansas and Oklahoma before they were welcomed back at the Cherokee Nation Peace Pavilion in downtown Tahlequah on Friday.

“Today the Cherokee people grew stronger as these nine cyclists received the heroes’ welcome that they deserve,” said Cherokee Nation Principal Chief Chuck Hoskin Jr. “The strength and growth of the Cherokee people have always been the work of generations, and it’s always been the work of community. You’ve seen that on display on this ride in both community and in former riders that are lending a helping hand to the new and younger generation or riders. This is what keeps us strong and keeps building us up to continue into the future as a tribe.”

The team of cyclists also paid visits to historical spots that are significant to Cherokee History over the last three weeks. They visited sites that were both historic and emotional – sites like Blythe Ferry in Tennessee, which is the last piece of Cherokee homeland Cherokee ancestors stood on before beginning their forced trek to Indian Territory. Other stops included Mantle Rock in Kentucky, where Cherokee ancestors sought shelter as they waited for the Ohio River to thaw during a bitterly cold winter.

“Before the ride even started, I wasn’t in the best mental place at all. I didn’t think of myself as a strong individual. I doubted myself a lot and I had a lot of insecurities,” said Cherokee Nation cyclist Kaylee Smith, of Tahlequah. “But coming back from this ride I feel like I can truly do anything I can set my mind to and I couldn’t have done that without my team.” 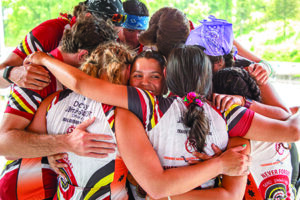 Nine Cherokee bicyclists who were part of the 2021 Remember the Removal Bike Ride embrace after finalizing their 950-mile journey on Friday with a homecoming ceremony in the capital city of the Cherokee Nation.

The ride’s inaugural event was held in 1984 to illustrate the hardships that the Cherokee people faced. It’s estimated that 16,000 Cherokees were removed from Alabama, Georgia, Tennessee and North Carolina in the spring of 1838. Nearly 4,000 of them died during the roundup, incarceration and removal.

“This ride was really challenging in all aspects and I think the biggest thing that pushed me was that my ancestors had to walk it. Our ancestors did not have the best circumstances and that’s what kept me going. Because we’re descendants of strong people, we can get through it, too,” said Eastern Band of Cherokee Indians cyclist Raylen Bark of North Carolina. “What I want others to know is just that we’re still here. Even though you don’t hear about this ride nationally, the strength of our ancestors is alive and well in each and every rider.”

Cyclists were greeted in Tahlequah by friends and family from the Cherokee Nation, Eastern Band of Cherokee Indians, and the United Keetoowah Band.