Mara Nelson, a member of the Eastern Band of Cherokee Indians (EBCI), has been admitted to the North Carolina State Bar Association.  After passing the bar exam recently, Nelson took the oath of office to enter the bar from District 30B Superior Court Judge Bradley Letts, also an EBCI tribal member, on the morning of Tuesday, June 15. 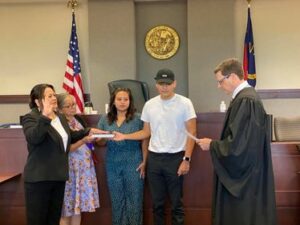 Nelson earned her J.D. degree from the College of Law at Arizona State University in 2002 after earning a bachelor of arts degree in economics from UNC – Chapel Hill in 1994.

“After graduating from UNC, I began working at the first tribal casino as the Tribe was negotiating with the state about our tribal gaming rules and regulations,” she told the One Feather.  “I found myself questioning the relationship between the state and the Tribe and federal government.  I decided to attend the College of Law at Arizona State University, as it was one of the few colleges that offers a specialization in Indian law.”

Nelson said she plans to serve the people of the Tribe and when asked what she’d say to other Native students thinking of pursuing a legal career, she noted, “I would encourage all Native students interested in law to go for it!  It may seem intimidating, but our tribal communities are best represented by their own tribal members.”