Volunteers are the lifeblood of North Carolina’s fire departments, but their numbers have fallen every year. 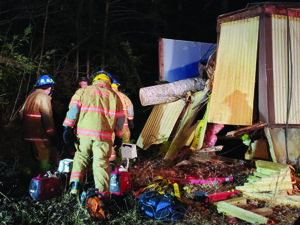 Tracy Mosley, who has 36 years of fire service and is the Program Manager of the North Carolina Association of Fire Chiefs (NCAFC), says that approximately 92 percent of the state’s fire departments are fully or mostly made up of volunteers. He noted that North Carolina is assisted by 37,000 volunteer firefighters, making them 75 percent of the fire service for the entire state.

As the population grows, however, volunteerism is not keeping up. Due to high expectations and aging demographics, the pool for those suiting up is draining.

“A lot of the shortage has been that people have, over the past decade or so, have been finding themselves working two, sometimes three jobs just to make ends meet. The other thing that we will definitely not discount at all would be that they’re spending more time with family,” said Mosley.

“They’re devoting all their time to family, which is paramount. We love that. But we’re trying to figure out how we can get the best of both worlds because we’ve lost a lot of service from people that volunteer.”

This is something that the NCAFC is working desperately to address with their Volunteer Workforce Solutions (VWS) grant. The NCAFC is learning how to accommodate the different regions of North Carolina, especially because this is the second such grant they have produced.

“With this grant and with this program, we’re trying to share those ideas with other fire departments across the state. Bring in new initiatives, offer tuition assistance for folks that have been with the fire department for a while, offer scholarships to go to different programs.”

This grant includes 15 fire agencies throughout the state that are quite varied. Some are like Wake County and contain multiple departments. Some are like the Hiwassee Dam Fire Department in Cherokee County, which is singular and much more isolated from support.

Chad McNabb has been the Fire Chief at Hiwassee Dam since 2007 and has 33 years of service at the department. He says that he is very thankful for the grant, but it has been challenging to promote volunteerism even with the funding.

“Our problem is that we’re so rural, we don’t have businesses. We don’t have a convenience store in our district to hang [flyers] up in. If we hang one up, we pretty much have to hang them up in another fire department’s district. Which is fine, because if they call us and they live in that district, I’ll just refer them to them. Because everyone needs the help,” said McNabb.

He said that many tactics for helping departments couldn’t work for a department like Hiwassee Dam. The NCAFC offered them some television advertising strategies, but they live in the Chattanooga viewing area, which means those ads would be nearly pointless for their department. 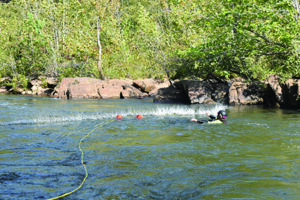 “They’ve given us a lot of stuff online, but again we’re so rural 90% of our district does not have high-speed internet. We could put up Facebook posts, Twitter posts, whatever, all day. Nobody’s seeing them in our district.”

McNabb also demonstrated how difficult it would be to pay firefighters in North Carolina. With the current rate of volunteerism in the state, the tax structure would have to change to accommodate salaries.

“We did a cost analysis on just our distinct, and we’re just a small part of Cherokee County. But for us to go full-time with a paid department and staff it by whatever the NFPA minimum staffing is, we’re looking at somewhere in the neighborhood of 2.5 million dollars a year in salaries. That’s just salaries. That’s not anything else. That’s not equipment; that’s not new trucks. Right now, we’re operating our distinct on about 250,000 dollars a year. But we would go 10-fold if we had to go paid,” said McNabb.

“We try to offer some benefits. We do have a 20-year paid retirement. Once you’ve been in 20 years and you hit the age of 55, you draw the State retirement through the Fire Fighters Association. But that’s really the only lasting financial benefit anybody gets.”

McNabb said that many of his volunteers are of an older generation as well. He said that so much is expected of younger folks today and that many of them don’t stay in rural areas like Hiwassee Dam.

“We’d love to recruit the 25-year-olds. But the problem is it’s like a lot of the rural areas. Our kids go to college, they get a degree, they do an internship, they hire on, and they stay in Charlotte, or they stay in Raleigh…because that’s where the money’s at. The demographics of the area’s changing. The fact is it’s getting older as the days go on.”

He says that he sees a lot of barriers to volunteerism, but the time involved in joining a fire department is the most difficult thing to get over.

“It’s the training. Obviously, you want them to be as well trained as they possibly can so that they stay safe in any situation. But the state has kind of put the same training requirements on the volunteer folk as someone who say works at Cherokee Fire, where that’s their full-time job,” said McNabb.

This time barrier is something the NCAFC is attempting to address. Mosley said that a crucial part of his message is that anyone can be a firefighter.

“People may say, ‘you know, I’m not in that good of shape. I don’t fit the mold to be a firefighter.’ Well, you can stand corrected there. You do not have to be the person on the nozzle going in the burning structure to be a firefighter. We have teachers that have come into the fire departments. They volunteer their time. They come in and they teach public fire education,” said Mosley.

He encourages people to call their local fire department and talk to them to see how they can help. Mosley gave another example of a local mechanic who has volunteered his time to work on the fire engines, which was an enormous benefit to his local department.

“If you’re helping the community to prevent a fire, then what are you essentially? You’re a firefighter.”

Another significant issue is that many people in North Carolina don’t understand how reliant the system is on volunteers.

“The fire service, in general, has become an expected service for the public. Folks are paying their taxes, they feel this is an expected service, and yet they don’t put the two together that it’s still a volunteer department. There are some of your tax dollars that help to pay for the equipment, but they’re not paying for personnel to be there,” said Mosley.

“They just know that when they pick up the phone and call 9-1-1, that someone’s going to be there. If it’s a housefire, they don’t understand that these people that are coming to their house may be coming from 3, 4, maybe even 5 fire departments or two counties away to help handle that emergency because of the lack of personnel that they have at their community fire department that is one mile down the road.”

This grant totals $780,000 that the NCAFC will spread between the 15 agencies. The departments use that money for advertising and requirement, and it is the second grant of its kind. The first came in 2018 and totaled $980,000.

This initiative holds tremendous value due to North Carolina’s limited options. A severe tax hike is not an easy sell to constituents, but with volunteerism dropping every year, it leaves volunteer departments in a precarious situation. The NCAFC is focused on awareness and recruitment. Without that, the current structure of North Carolina’s fire departments could need reform.