Children in Cherokee will soon have a valuable resource with the construction on a new Cherokee Youth Center slated for completion next Spring.

It has been two years since the groundbreaking of the Youth Center site on Acquoni Rd. The new building is located on the lot behind the old location and is expected to be finished by March of 2022. 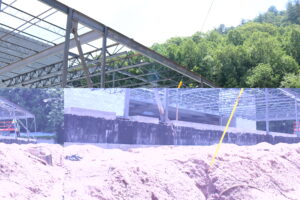 The new Youth Center project is one paced for a Spring 2022 completion date. They are currently finishing the steelwork for the building. (JONAH LOSSIAH/One Feather photo)

“They are currently finishing up the steel. All the steel is there and in place. They have the roof insulation today [May 27], they’re starting to put the roof on the gym. They’re doing the deck on the second floor, so that’s getting put in right now,” said Christopher Greene, manager of EBCI Project Management.

Greene said that there are no concerns financially and they are still in the initial 19-million-dollar budget. This project is a joint venture with contractors Beverly-Grant, INC and Barnhill.

When the project first launched, the hope was to have it done by some time in 2021. Several issues got in the way of beginning construction, however, with the most notable coming last year.

“The only issues we had were getting through COVID. COVID caused delays of about three months, probably. We ran into COVID right when we were going to bid it out, and we had to wait until all that was over. As soon as that was over, we hit the ground running,” said Greene.

He said that while the pandemic interrupted some progress, it could have been much worse. Once they managed to secure their bid for the project, the Tribe made sure that construction could continue as planned.

“We got an acceptance for just this project to keep this one going to allow when they closed off the borders, we worked with the Chief and basically got these guys letters to where they could still come in and out as long as they stayed on the construction site. And, honestly, us working through that and allowing that is why we’ve been able to maintain the schedule,” said Greene.

The operations at the Cherokee Youth Center have been limited over the last year due to both the construction and the pandemic. They are currently working out of a modular building that is set across the street from the construction site of the new building. Matt Hollifield, manager of the Cherokee Youth Center, said that this new facility will help launch the program to new heights.

“We’re really excited about it. We’re going to pretty much double capacity as far as how many kids we can take. For years, we’ve ran with a waiting list of about 100 kids throughout all the grade levels. We’ll be able to clear that off and still have room for more kids once we open the new place. It’s been really exciting for the parents and the kids, both,” said Hollifield.

The new facility will feature a gymnasium as well as significantly more outside features. He said that there will be a playground for younger kids behind the building, and options such as basketball courts up front.

Hollifield said that the number of kids they had during the pandemic was reduced to about 75, half of their normal, full capacity. They have been slowly implementing more spaces as restrictions have eased.

“We’re going to go back to 100 percent on [June 7th]. So, all the kids that were already enrolled at the beginning of this whole project, they’ll get to come back for the summer program. We have a lot less space over here than we had across the road, but the staff’s done well to adapt and get some activities together and programs that kind of fit that lessened space,” said Hollifield.

The new building will also bring a several new openings for staff. Currently, there 15 Youth Development Professionals (YDPs) in the program, with three more positions frozen. According to Hollifield, they will be looking to add another 10 YDPs when they move to the new building.

The next step is to finish the concrete and the steel of the building. Once that is done, getting to the next step will make the timeline more assured.

“The next big milestone is obviously to be dried-in. So, to get the roof on. That way the weather no longer affects us. That’s always a big milestone on a project. We are marching towards that,” said Greene.

Once the Cherokee Youth Center is able to move into its new facility, that will leave the modular set-up open to any other program that is planning to relocate.

“The original idea of this place is to basically be a temporary location for anybody that is getting a new building. A new project, anybody that’s going to be displaced would go here until their new building is complete. So, that’s kind of the idea behind us purchasing this modular. It was always going to be a transition spot,” said Greene.

Hollifield said that he can’t say enough about the people he has worked with during this tumultuous time.

Our staff, we’ve put them in a lot of stressful situations through all this and they’ve been great. They’ve worked with the kids every day. They have to wear their masks constantly and remind the kids to wear them and all that. It’s a lot smaller space than they’re used to. They’ve just been great throughout. I’m really looking forward to when they get to kind of spread their wings and put their stamp on their areas.”

Greene said that they are through with approximately 35 percent of the construction. With many of the less predictable steps taken care of, the aim is transition into the new building during Spring Break of 2022.