Construction at CCS nearing next milestone

Cherokee Central Schools (CCS) is just a few months away from stage two of a serious makeover of its campus.

CCS and Vannoy Construction are nearing the handover date for the three new buildings being constructed. Those spaces include the North Building, South Building, and the new Gathering Place.

“We have North Building underway, which houses the wrestling facility, Central Office, and our Path Seekers program,” said Yona Wade, CCS director of community affairs. “So, we’ll be moving Central Office and Path Seekers over to the North Building. Then we’ll be having that additional multipurpose space, which will be used for wrestling when it is wrestling season, but then can be used for a variety of other activities.”

The South Building will house Pre-K spaces and offices on the first floor, as well as cultural classrooms on both the first and second floors. The school’s old Gathering Place was also demolished, and its replacement is nearing completion. One of the major features is proper heating and air for all-season events, something that severely limited the old space.

“We’re about through with the South Building and the Gathering Place, and hopefully starting in June we’ll be moving to some of the interior renovations,” said Wade.

Projection dates are subject to change, but the current plans for handover to CCS are as follows:
• South Building – July 30
• Gathering Place – Aug. 11
• North Building – Aug. 18

This is just the first step of a massive undertaking on the campus, however. As soon as programs shift to their new homes, many of the old buildings will be seeing renovations. This stage of the project could take an additional year or two. The current estimation for full completion is February 2023. 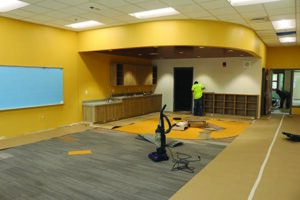 Work is being done in a Pre-K classroom in the South Building.

Among these plans, the current home of Central Office will hold additional classrooms for the High School, allowing them to expand their enrollment. More information for these renovations will become clearer following completion of the new buildings.

“The M renovation, I’m actually really excited about that one. We’re taking where the current band room is located, and the band is going to be relocated. We’re turning that into a culinary arts kitchen. It’ll be able to receive a sanitation grade. They’ll be able to expand what they offer now,” said Wade.

The South Building and Gathering Place have the same project superintendent and are expected to be finished very close to the same time. Once these are done, the full crew will be able to shift over to the renovation stage. The same will occur shortly after for the North Building.

Wade said that the school is already well into negotiations for interior decoration, and they will be ready to roll as soon as the buildings are handed over to CCS. He also said that the plan is to get turnover done before the school year begins, but that patience will be necessary through this process.

“It depends on that schedule. Our hope is yes. The hope is as soon as that North Building is complete, we’ll start the transfer of Central Office and the Path Seekers program hopefully over the summer to that space.”

This enormous project is part of a $22 million plan that was announced two years ago. Despite breaking ground during the height of the COVID-19 pandemic, the project is on schedule and looks to finish on time.