May 22 marked the beginning of the Third Annual Fire Mountain Inferno, drawing in mountain bikers from all of the region to participate in the two-day event held in Cherokee.

The Inferno holds a different style of race on each day and riders are split in skill groups to compete. The four levels of riders are expert, sport, beginner, and junior. On Saturday, riders participated in Enduro races, which are speed runs that are all downhill. Sunday was for cross country riding, which sees each skill level following different routes all over the Fire Mountain Trails. The experts completed a 16-mile race.

Annette Saunooke Clapsaddle has ridden in all three Infernos and has been mountain biking since the Fire Mountain Trails opened in 2017.

“Last weekend was great. I think it was a real testament to how many people, especially in our community, have embraced mountain biking and Fire Mountain Trials and just came out to celebrate that community that’s been building. It’s the first time since COVID that we’ve been able to do something like that,” said Clapsaddle.

She raced the first two events at the beginner level, and this year she stepped up to sport. She finished third in the Enduro race and fourth in cross country.

“It’s fun to see how everybody has grown in the sport. We’re all such big fans of each other too. That’s a really positive aspect of the sport. It doesn’t really matter what level of rider you are, everybody wants to see you continue to be successful however you define it.” 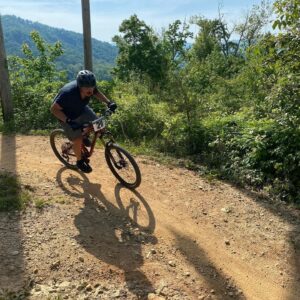 May 22 marked the beginning of the Third Annual Fire Mountain Inferno, drawing in mountain bikers from all of the region to participate in the two-day event held in Cherokee. (Photo contributed)

Clapsaddle said that one the best things to see as the event has grown is the influx of Cherokee riders each year. One of those new riders this year was Laura Blythe, who participated in the Inferno for her first time.

“I have been riding a mountain bike since late 2019, and I’ve always seen the Inferno going on with mountain bikers up there. My goal was really just to be able to participate. I’ve found a passion for mountain biking, I’ve met some really great people. It’s an entire fun community, I don’t think people understand the stuff behind it is what makes it so great,” said Blythe.

Blythe was volunteering for the event on Saturday, but on Sunday she placed first amongst the beginners in the cross country race. She says that she has developed a serious passion for the sport, and that it was special to be able to compete for the first time.

“The buzz for everyone was so high. That excited energy. I met so many cool people this weekend. Made some friends, they’re wanting to come back into town and we’re going to go riding. Really, that’s kind of what the whole community is about,” said Blythe.

“Sometimes us being local, we kind of take our local areas for granted. I mean, we have people from Florida that come to these trails and are like, ‘oh my god, these are the best trails I’ve ever ridden on.’ They’ll specifically come up here because they’ve heard from their friends of friends talk about how great these trails are.”

Jeremy Hyatt, Secretary of Operations for the Eastern Band of Cherokee Indians, is the primary organizer for this event. He said that they still had to make a few changes to this year’s event because of the pandemic. Many of the regional companies that come to the event were unable to do so because of production backlogs. With about 230 riders participating over the weekend, he said that he is excited to see how the event continues to grow despite all that has shifted over the last year.

He said that he and his staff pride themselves in offering this service to the community while maintiaing self-sufficiency through sponsorships and entry fees. Hyatt said the Inferno brought in nearly $11,000 this year, not including $4,200 in merchandise sales from the weekend.

Hyatt said that he loves the Inferno and the Harvest Half Marathon that his team holds in September, but the growth in popularity is making him review the future of these events. He said that they take a tremendous amount of effort to put on, and it probably shouldn’t be something done through his office.

“My thought is to have someone who can handle the outdoor assets. The disc golf course, the trails, even the Island Park for that matter. But also handle the events, handle the social media aspect of it, handle the marketing of it, and handle the community outreach for it.”

He said that is thrilled with the community support and is hopeful people continue to push for more events such as these. Many positions and budgets are still frozen due to the budget crisis caused by the pandemic, and Hyatt said this is something he will continue to work on as the Tribe progresses to normalcy.

When it comes to Fire Mountain, Laura Blythe says that she is calling upon her friends and neighbors in Cherokee to hit the trails. She said that she’s just a call away and she’ll take anyone mountain biking.