CULLOWHEE – Bardo Arts Center at Western Carolina University has announced plans to host a permanent and contemporary exhibit of Cherokee culture and language, developed in collaboration with members of the Eastern Band of Cherokee Indians.

“This exhibit will tell a story that is authentic, vibrant, informed, and influenced through many years of research, collaboration and partnership with members of the Eastern Band of Cherokee Indians and scholars within the community,” said Denise Drury Homewood, BAC executive director. 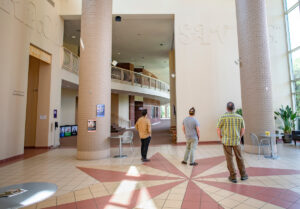 Bardo Arts Center at Western Carolina University has announced plans to host a permanent and contemporary exhibit of Cherokee culture and language, developed in collaboration with members of the Eastern Band of Cherokee Indians. (WCU photo)

An $88,050 grant from the Cherokee Preservation Foundation will help fund the final implementation phase of the multi-year effort, with an anticipated completion in the spring of 2022. Additional support will come from WCU’s Cherokee Studies Program, Cherokee Center and Bardo Arts Center. The exhibit will include bilingual educational information in both Cherokee syllabary and in English, various art installations, along with a multimedia component that will allow visitors to experience the Cherokee language.

“Bardo Arts Center sees so many visitors from so many places, coming for art, performances and exhibitions,” said Sky Sampson, director of the Cherokee Center. “This will have a huge impact showing the connections of the Eastern Band of Cherokee and Western Carolina University, and this land,” “It also will demonstrate that Cherokee culture is a living, breathing and authentic thing, not a historical footnote. We are still here and thriving.”

Opened in 2005, BAC already features numerous Cherokee-inspired design elements. In the main atrium, the tile floor design of a seven-pointed star represents the seven Cherokee clans; bilingual signage in Cherokee and English, originally translated by Myrtle Driver, Beloved Woman of the Eastern Band of Cherokee Indians, can be seen throughout the center. Cherokee Syllabary on the walls of the main atrium translates to “Our Story Lives On,” “Peaceful” and “Honorable.”

Home to the WCU Fine Art Museum, BAC Performance Hall and the Niggli Studio Theatre, the center is dedicated to serving the region as a cultural catalyst to inspire, enrich and educate communities. For more information about this project, visit arts.wcu.edu/CherokeeExhibit.