“Never forget what they did”: Cherokee honors fallen on Memorial Day

Flags and flowers decorated the graves of heroes buried in the Yellowhill Veterans Cemetery on Monday, May 31 (Memorial Day, formerly Decoration Day) as the Steve Youngdeer American Legion Post 143 held its annual event there on that morning.

Lew Harding, Post 143 commander, welcomed everyone to the event, “We are happy you are here to honor, in your hearts, those whom we honor today – not just this day, but every day.” 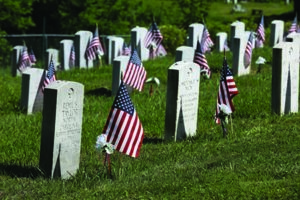 Flags and flowers decorated the graves of heroes buried in the Yellowhill Veterans Cemetery on Monday, May 31 (Memorial Day, formerly Decoration Day) as the Steve Youngdeer American Legion Post 143 held its annual event there on that morning. (SCOTT MCKIE B.P./One Feather photos)

Col. Robert Blankenship (Ret.) read a list of names of members of the Eastern Band of Cherokee Indians (EBCI) who were killed in action in defense of the nation as Legionnaire Phyllis Shell rang a bell in their honor and memory.  Prior to reading those names, he commented, “The men and women who paid the ultimate sacrifice are buried in family cemeteries, church cemeteries, military cemeteries, and veterans cemeteries such as ours here at Yellowhill.  Some of the bravest and proudest soldiers who ever served our country are the Cherokee soldiers who rest here in Yellowhill – resting in peace knowing they gave their best to their people and their country.”

Those EBCI tribal members killed in action include:

“Never forget what they did,” Lew Harding, Post 143 commander, said in his remarks.  “We owe them the promise that we will tell future generations about what they did and that they paid the price for our freedom and our liberty.  Our children must never forget that freedom is bought with the lives and the blood, sweat, and tears of those patriots whom we honor today.  Sacrifice is a pre-condition of a free people.  Its neglect comes at the cost of us all.” 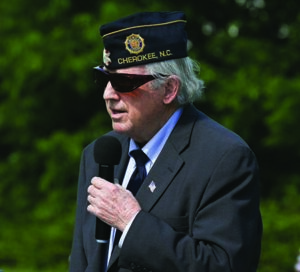 Commander Harding added, “Serve your family.  Serve your neighbor.  Serve your tribe.  Serve your country.  Mindless adherence to an ancient dogma of us versus them will destroy us all.  We are them.  Our religious, economic, political, and social systems must reflect the scriptural mandate ‘love ye one another’.  Embrace the rapid change that we see around us every day.  Be part of the healing rather than the hurt.”

During Monday’s ceremony, Warren Dupree, Post 143 service officer, spoke of PFC Clarence Albert Murphy whose name was added recently to the memorial marker at the Cherokee Veterans Park as well as to the list above.  His story was unbeknownst to the Post until it was recently told to Post officials.

PFC Murphy was assigned to U.S. Army Battery A, Coast Artillery Corps and died on April 18, 1945 from wounds suffered 12 days earlier during an attack on the U.S.S. North Carolina during the Battle of Okinawa.  He was subsequently buried at sea. 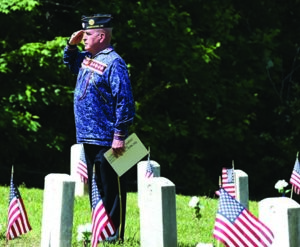 The U.S.S. North Carolina came under attack from over 350 Japanese kamikazes.  “At 1:05 p.m., the U.S.S. North Carolina BB-55 was accidentally struck by friendly fire,” Dupree noted.  “One five inch 38 caliber anti-aircraft common projectile impacted the base of the port…killing three men and wounding 44 in nearby areas and disabling the gun director.”

He continued, “PFC Clarence Albert Murphy was in the area of impact and suffered severe wounds during this action.  PFC Murphy passed away as a result of his wounds on April 18, 1945.  His body was sewn into a canvas shroud that was weighted at the foot with two five-inch projectiles weighing 60 pounds each, and then buried at sea with the U.S. Navy’s traditional, solemn military honors service.  The burial location was 100 miles east of Okinawa.”

Legionnaire Shell, U.S. Army, offered two musical selections during the event including “In Honor of Those Who Served” and “God Bless America”.

SFC Norma Adona, U.S. Army, played “Taps” at the end of the ceremony and Big Cove Rep. and Legionnaire Perry Shell gave opening and closing prayers.  The Post 143 Color Guard fired a salute to the fallen as well.