Cherokee High School (CHS) officials have announced that Shalyn Barker and Maya Cruz are the Class of 2021’s valedictorian and salutatorian respectively.  In addition to excelling in academics, both young ladies were active during their years at CHS in various clubs and sports.

“I feel like it is a great honor and something that I’ve worked hard for throughout high school,” said Barker.  “I’m very excited to be at this point in my life and to have had the opportunity to go to the greatest high school on Earth.” 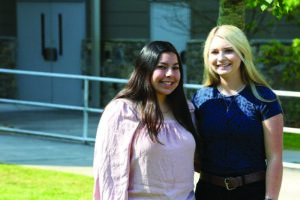 Barker will further her education at N.C. State University this fall where she will attend as a coveted Park Scholar.  She will major in biology at N.C. State, and she then plans to attend medical school with the goal of becoming a pediatric oncologist.

“I feel extremely proud of my school and that I’m able to represent it,” said Cruz.  “I’m just grateful that I had the opportunity to do it and to showcase my full potential here.”

Cruz will attend Stanford University this fall where she will major in biology or something in the science field and later go to dental school to become a dentist.

When asked what advice they would give to the incoming freshman class, Barker replied, “I would definitely tell them to soak it all in because it goes by fast and to really give it their all and pay attention and focus.  This is really what molds your future and shapes the path that you will go on later in life.  So, you’ll really need to try to excel and give it your best.”

Cruz noted, “I would say don’t sweat too much over the small stuff and think about the big picture and the long run.  Know the difference between enjoying your youth and ruining your future.”

Both are very grateful for the support they’ve received over the years.  Barker commented, “I would like to thank my parents, my sister Paytyn, my grandpa and grandma, and God for all of my successes in life.”

Cruz said, “I’d like to thank my family and all of my teachers who have taught me here.”