More than 2,200 students were nominated for this full-award, and Barker is one of just 39 students selected. Along with the financial benefits of the honor, Park Scholars are offered a host of resources to help them excel at the university. These include priority registration, unique seminars and lectures, and access the Park alumni network. 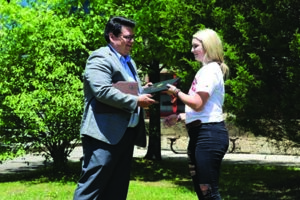 Shalyn Barker, right, is just the second student from Cherokee High School to receive the Park Scholarship. The first was Cory Blankenship, who presented the certificate to her on Thursday, May 20. (JONAH LOSSIAH/One Feather photos)

“The Park program, and the mentorship and the support and the opportunities that they have within themselves, that was something I was really drawn to. Then, having that smaller community. I wanted to go to a big school, but at the same time have that smaller sense of community. So, that was something I was really attracted to,” said Barker about her interest in applying.

She also said that NC State had been on her shortlist for schools, particularly its Department of Biological Sciences. Her plan is to major in biology and follow the steps to becoming a pediatric oncologist.

Barker said that the path to earning this scholarship took a significant amount of patience. There are multiple stages before getting selected for the Park. The initial application is all file submissions. Résumés and essays were sent in by the more than 2,200 applicants. From there, 400 students are named semifinalists and the first interviews are conducted. Only 120 students are picked as finalists and attend a ‘Park Weekend’ event, which was held virtually because of the pandemic. Final interviews and discussions occur before the final cut. The following week, the winners are called.

“It was very intimidating at first when I did the Park weekend and met all the other kids. Because they come from much larger cities. But, here at Cherokee, I feel like I’ve been provided with a lot of wonderful opportunities and things that make me stand apart and help me excel as a student. Hearing the opportunities they have and then talking with them, I realize I’ve had a lot more one-on-one experiences and specialized things here at Cherokee. So, I was very thankful for that,” said Barker.

Dr. Debora Foerst, principal of CHS, announced at Barker’s ceremony that she had also earned the honor of being named the valedictorian of her senior class. Dr. Foerst consistently worked with Barker throughout the application process, often offering her time for mock interviews. She remarked that Barker stands out in one of the most impressive senior classes she’s seen come through CHS. 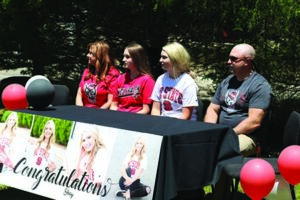 Barker was joined by her friends and family for the ceremony that was held in the courtyard of Cherokee High School.

“I know that she was anxious through some of it. She’d get really nervous about some of her interviews and things like that. I know when we engaged in some of the mock interviews, she always answered intelligently. She was on point, she elaborated as she needed to. Those were also fun for me to participate in that way,” said Dr. Foerst.

Barker is just the second CHS student to be named a Park Scholar. The first was Cory Blankenship, who is now the Secretary of Treasury for the Eastern Band of Cherokee Indians. Blankenship was the Park alumni who spoke at Barker’s ceremony and presented her with a certificate.

Blankenship said that the Park is a lot more than the financial piece, and the strongest asset is the unity you have with your class.

“It’s not just the alumni network, it’s also having a group of students and faculty that you’re already familiar with when you get to a campus the size of NC State. Knowing that, at any given time, there could be 50,000 people on campus. So, it’s a culture shock coming from a small school to go into university like NC State. So, I think that the most important thing about Park is the sense of community that you have, and those connections that they have,” said Blankenship.

This is one of many honors that Barker has received over the last few years, but the COVID-19 pandemic has limited her ability to experience some of those achievements. She was selected to the Governor’s School of North Carolina and was set to attend last summer before it was inevitably cancelled. She said that staying focused with the shut down has been a challenge.

“It was difficult, but I just had to think of the bigger picture and the things that I want to do later on in life. Getting to come back to school, that really helped. Seeing my friends and things like that,” said Barker.

With restrictions continuing to lessen, it would seem the Raleigh campus will be fully open come August.

The now Park Scholar and valedictorian has just a few days before her graduation on Saturday, May 29 – a moment she admits will be bittersweet.