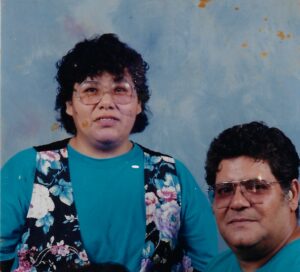 Sally Catolster Sampson, age 61, passed away on Tuesday, May 18, 2021 at Tsali Care Center, after an extended illness. A member of Old Antioch Baptist Church and the Yellowhill Community, Sally is the daughter of the late Codeskie “Spade” Catolster and Lucinda Crowe Catolster. Sally was a kind-hearted lady and never knew a stranger. She always had a smile on her face and enjoyed video games, rides in the parkway, and especially trips with Tamara to wherever.

Funeral services were held on May 22 at the Old Antioch Baptist Church with Bear Lambert officiating.  Burial was in the Sampson Family Cemetery.  Pallbearers were among family and friends.