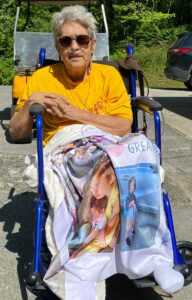 Patricia Tootie Kanott Lambert, age 71, of Cherokee, passed away at her residence in the Wolftown Community on Friday, May 14, 2021 after an extended illness. A lifelong resident of Cherokee and member of Acquoni Baptist Church, she is the daughter of the late William H. Kanott and Naomi Jackson. Making the trip by herself to Cleveland, Ohio, she attended and graduated from Cleveland Academy of Professional Secretaries and then worked as a secretary for The Job Corps until she retired.