CULLOWHEE – Western Carolina University Board of Trustees awarded Cherokee scholar Thomas Belt with its highest honorary degree, doctorate of humane letters, as part of its commencement ceremonies Saturday, May 15. 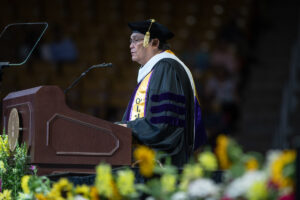 Western Carolina University Board of Trustees awarded Cherokee scholar Thomas Belt with its highest honorary degree, doctorate of humane letters, as part of its commencement ceremonies Saturday, May 15. (WCU photo)

Belt, a Cherokee Nation citizen who speaks the western dialect of Cherokee, retired in 2018 as coordinator of WCU’s Cherokee Language Program. His work to preserve and revitalize the Cherokee language and traditional culture have had profound significance, not only for WCU, but the region and nation as well.

“It just finally occurred to me how prestigious it is for someone like me to be honored in this manner,” Belt said. “Even at this point I don’t have words for it. The fact that I am being recognized for the work that I did humbles me because I was just doing the best that I could do with my colleagues. It is an extreme honor to accept this from the university.”

Belt was raised in a Cherokee-speaking family in Rocky Ford, Okla. He later moved to the Eastern homelands in the early 1990s. He continues to live on the Qualla Boundary of the Eastern Band of Cherokee Indians where he first worked as a teacher in the Cherokee Central Schools.

As a teacher and scholar at WCU, he developed vital materials for teaching Cherokee language and prepared multiple cohorts of students to read, speak and teach Cherokee language themselves. He is most noted for his written and spoken works, and appearances in widely publicized documentary films that continue to be used by students, scholars and Cherokee community members.

In addition to his on-campus accomplishment, Belt worked closely with the American Philosophical Society and the Smithsonian Institution to develop and enact protocols for the treatment of Cherokee archival materials, in particular culturally sensitive materials in the Cherokee language. He also served as a consultant to multiple university programs, providing regular addresses and workshops at the University of North Carolina at Chapel Hill, Stanford, Yale, Duke and Wake Forest regarding the importance and significance of indigenous languages and the worldview of Cherokee culture.

“Tom worked tirelessly to make WCU a more welcoming place for Cherokee and Native American students,” said Kelli Brown, WCU chancellor. “These students had not always seen WCU as their place, in spite of Cullowhee’s identity as a significant ancient Cherokee site and its proximity to the Qualla Boundary. With his help, we began to change, working to make Judaculla’s place a true home for Cherokee and Native American students.”

WCU is located near the ancient sacred Mother Town site of Kituwah and Belt has worked tirelessly to restore and preserve its history.