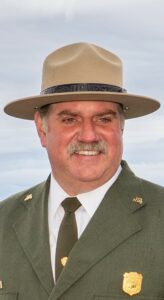 Great Smoky Mountains National Park Superintendent Cassius Cash announced on Monday, May 17 that Alan Sumeriski has been selected as the deputy superintendent. Sumeriski has served as the Facility Management Division chief since 2007, along with multiple detail assignments as the acting deputy superintendent in the Smokies and other leadership roles at the Washington and regional offices for the National Park Service (NPS). He steps into this permanent role with a tremendous amount of knowledge regarding ongoing issues and park operations, along with park partner and community relationships.

“Alan is a well-respected senior leader in the National Park Service with over 30 years of experience in managing some of the most complex operations in the National Park Service and I’m honored to select him as the next deputy superintendent of the Smokies,” said Superintendent Cash. “As acting deputy superintendent, Alan has consistently provided strong and innovative parkwide leadership to help us meet the challenges of today and tomorrow.”

Sumeriski started his career as an engineering equipment operator at the Greenbelt Park and Baltimore-Washington Parkway in 1989. From there, he moved up the ranks and served across the country including leadership positions at Yosemite, Yellowstone, Cuyahoga Valley, and Olympic national parks. Alan’s career also includes two notable temporary detail assignments where he provided leadership beyond park boundaries. He served as the acting deputy regional director for the Southeast Region for four months in 2014 and as the Chief of Facility Management for the Southeast Region in 2012 for five months where he oversaw park operations for 68 parks.

Sumeriski has received many awards for his leadership during his NPS career including the 2020 Facility Manager of the Year for NPS, the 2019 Facility Manager of the Year for the South Atlantic Gulf Region, and the 2010 Park Employee of the Year for Great Smoky Mountains National Park. He provides leadership for over 150 permanent and seasonal staff who care for 384 miles of roads, 146 bridges, 152 historic cemeteries, 27 water and sewer systems, 10 campgrounds, 11 picnic areas, 848 miles of trails, and over 100 historic structures and landscapes.

Sumeriski has also overseen major projects such as the completion of the Foothills Parkway’s “Missing Link” in 2018, construction of the Oconaluftee Visitor Center and Collections Preservation Center, $100 million worth of infrastructure improvements through the American Recovery and Reinvestment Act funds in 2009, and has recently helped secure funds for the rehabilitation of Park Headquarters, repaving of Cades Cove Loop Road, and safety improvements for one of the most heavily traveled roads in the NPS along Foothills Parkway Spur between Gatlinburg and Pigeon Forge. He is also providing leadership to secure Legacy Restoration Fund monies for repaving the Foothills Parkway and designing rehabilitation for the North District Maintenance Facilities through the Great American Outdoor Act.

A native of upstate New York, Sumeriski has a bachelor’s of science degree in business management from the University of Phoenix at Cleveland, Ohio. He and his wife Kim live in Sevierville, Tenn. where they raised their two daughters Kasey and Alicia. They enjoy exploring national parks, traveling, and sharing the wonders of the outdoors with others.