North Carolina Chief Justice Paul Newby toured the Tribal Court system as part of his 100-county tour on Tuesday, May 11.

Chief Justice Newby was elected by a narrow margin in November of 2020, beating out incumbent Cheri Beasley by 441 votes out of the 5,391,501 cast. He began his day by speaking at the N.C. Police Chief’s meeting held at the Harrah’s Cherokee Casino and Resort before arriving at the Tribal Court just after 10 a.m. 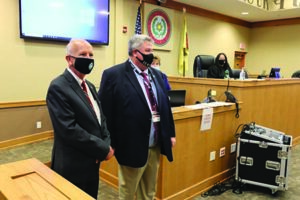 There he was greeted by Tribal Chief Justice Kirk Saunooke and given a tour of the facility. Justice Newby spent his time going to each of the staff members at Tribal Court to introduce himself. He said this was the main purpose of this 100-county tour of the State.

“It’s an opportunity for me to say thank you. I mean, think about it. March, April of 2020 we don’t know what this COVID thing is, and yet we’re asking our magistrates, our deputy clerks, and others to show up for work every day. They can’t work from home,” said Justice Newby.

He said that he understands operating as a Tribal Court can raise its own challenges.

“You have a unique sovereignty…here for the Cherokee people. There has to be such great coordination with the county, the non-Tribal courts,” said Justice Newby.

Given this unique set-up, Justice Newby said that he will rely on personal relationships and communication to ensure he can assist in an appropriate manner. Particularly he has been working closely with N.C. Superior Court Judge Brad Letts.

“Certainly, I will continue to consult with Judge Letts, who is an incredible resource. To have him in the State Court system but given his Cherokee heritage to help us better understand how we can work together. But then, of course, having gotten to know [Chief Justice Kirk Saunooke], to work with him as we seek to make the two courts work together seamlessly,” said Justice Newby.

Chief Justice Saunooke said that the visit went very well and that he was grateful for how engaging Justice Newby was at the Court.

“I think this is a recognition, the fact that he would visit here. And we’ve had several other Chief Justices come in here.He’s continuing that tradition. It helps improve our relations with the state. They know us. They’re familiar with us now. They chose to include us over the years in the state judges conference, and even Judge Letts had facilitated our judges being invited to the superior court judges conference. So, it helps with recognition, and it improves tribal sovereignty I think,” said Saunooke.

He continued by saying personal relationships with Justice Newby and others in the State is an important asset for the Tribal Court. He said that Justice Newby told him to reach out any time there is something that could be done to assist at the State level. 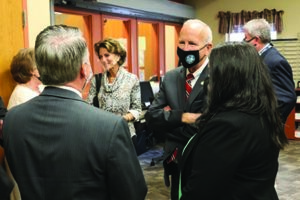 Justice Newby said that since he stepped into office, he has placed a high value on the knowledge of the local courts across North Carolina. He said that his office is assessing the different options for managing the systems as the restrictions from COVID-19 begin to lessen.

“A couple of things with that. One is to ensure that the senior resident superior court judge is empowered to make the decision for their local courthouses. When I became Chief Justice, it was much more ‘we’re in Raleigh, we gotta tell the localities how to do things.’ And my approach is, ‘I’m in Raleigh, I don’t know what’s best for the various counties.’ Cherokee, Swain, these counties need to make their own decisions … to allow the senior residents in conjunction with the other stakeholders – the clerks of court, the district attorney, the district court judges, to make those decisions as to what’s best for them.”

Chief Justice Newby’s position also places him as the head of the Administrative Office of the Courts, and he said listening to each court’s needs is important. That includes Cherokee.

“We as the Administrative Office of the Courts actually help the Tribal Court with regard to resources and things like that. It’s our goal to assist and equip the Tribal Courts and the courts throughout North Carolina to do justice. The courts, the local courts are the ones administering justice. So, the Administrative Office of the Courts needs to serve them and provide whatever support that they need in order to dispense justice.”

This was one of the first stops on this statewide tour, visiting each region in sections.

Justice Newby has served on the North Carolina Supreme Court since 2005, when he was elected to the senior associate justice position. The N.C. Chief Justice serves an 8-year term, with Justice Newby being sworn in January of this year.