The $330 million construction project at the Harrah’s Cherokee Casino and Resort could be seeing a grand opening in the coming months.

Originally slated for completion by early 2021, the project’s timing has primarily stayed true to course. The budget, however, saw an $80 million increase from the first projection of $250 million to complete the construction. This led to a budget meeting with Tribal Council last year to address the finance and communication between Harrah’s and the Tribe. 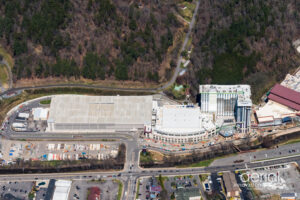 According to Brian Saunooke, regional vice president of marketing for Harrah’s Cherokee, an opening should be expected some time after summer of this year.

“It’s going to be later. It’s not going to be a summertime open. It’ll be late fall, some time in that half of the year would be an easier target to nail down at this point. There’s still a lot of variables out there. Everything’s coming together according to timelines, but it’s a little too early to announce an official opening date,” said Saunooke.

Significant steps have been taken with the new parking deck being finished. The enormous concrete structure is situated on the western side of the resort and is connected to the new convention center. This parking deck has 2,000 individual spaces.

According to Harrah’s, the framing for all the guest rooms is now complete in the new hotel tower. Finishes for the rooms on levels 3-7 are also done.

Saunooke said that despite how tumultuous last year was for business and day-to-day living, the project did well to maintain its timelines throughout.

“The contractors, Whiting-Turner and Dreamcatcher, did a nice job of staying on track through what were probably the toughest months of Fall and Winter. And we’re still on schedule to turn the project over in late 2021,” said Saunooke.

He said that some of the ‘variables’ involved with getting everything ready for a grand opening were simple but involve a lot of moving pieces.

“Any time you’re doing a construction project, whether it’s your home or whether it’s a major commercial project like this, just those finishing touches take a long time. You’ve got the final touches that are done, as well as the furniture, fixtures, and equipment that are installed.”

The Book, North Carolina’s first sports betting locations, opened this March in Cherokee and the River Vally location. By the end of the year, many of Harrah’s long-term projects in Cherokee will be completed. Saunooke said that while they are always looking forward, the Casino is focused on finishing what they have on their plate and don’t have anything significant planned for immediately after.

“No, this is it. We’re continually looking for opportunities, so I’m sure ideas are being generated. But this is a huge undertaking, and we’re just looking forward to the competition of this milestone.”

Saunooke said that this project will help reset the scale for what the resort is and can be. He said that the Harrah’s Cherokee Casino and Resort was already a landmark in the region, but now with the accommodation of a convention center, that name can continue to grow.

“The things that we want to make sure people know about this project is that the resort is currently the largest hotel in the Carolinas. And with an additional 725 rooms and convention space, it really solidifies the Casino and Resort as one of the premier gaming destinations and now convention destinations in the Southeast.”