After having several wrestlers qualify for the NCHSAA 1A State Tournament last season, this year’s Cherokee High School (CHS) varsity team is looking to bring home some hardware this year.

“Keep on grinding and keep on going,” Masih Catolster, a junior who won the Smoky Mountain Conference (SMC) title in the 285lb. division in February 2020, said when asked his thoughts on the upcoming season.  “I just hope everybody is supportive of each other.  We need to keep a good environment, keep our heads straight, keep the mentality, and keep on going.” 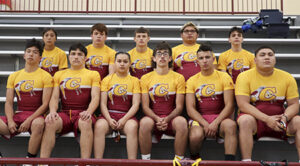 When asked about his goals for this season, he noted, “I want to stay healthy, win state, stay motivated, and keep my head clear.”

Caden Pheasant, a senior who won the SMC title in 2020 in the 170lb. division, said of his thoughts coming into the season, “I just need to keep on the road to state and keep grinding.  Keep going hard.  It’s a little weird because it’s COVID, but at the end of the day you’re still on the mat with another person and going at it as hard as she can.  You’ve just got to want it more than they do.”

Braden Taylor, a senior, took second place in the SMC tournament in 2020 in the 160lb. division noted,  “The past couple of years, we really haven’t had a full team.  This year, quite a few people showed up and we have a pretty good team.  I feel like we can make a run for the team conference this year.”

Catolster said the team mentality is strong and very supportive.  “It makes us better too.  Once you lose, just don’t give up.  Stay with the team and just keep going and just get better.  There’s always going to be someone over you.  You’re going to always have to surpass something.  It’s just another object to get over.”

Pheasant added, “It’s kind of different, as an individual sport.  But, either way, it’s like a big brotherhood and sisterhood now as we have some good girl wrestlers coming in.  It’s really supportive when you need it to be.”

This year’s team has two girl wrestlers including Alitama Perkins and Jaylynne Esquivel. 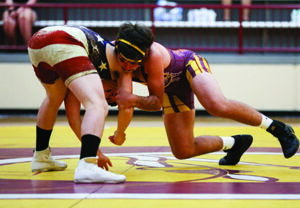 Braden Taylor, right, Cherokee senior, wrestles Kyle Jamerson, of Madison, in a match at the Charles George Memorial Arena on the evening of Friday, April 30. Taylor won the match by a pin.

Perkins, a freshman who will wrestle in the 138lb. division, commented, “Growing up, I was always a lot closer to the guys.  I was always just around them more and then split up during sports seasons.  I missed having my family, it felt like, because these boys are more than teammates – they’re my family.  When I saw everyone going to wrestling, I thought, ‘I want to try that, that looks pretty cool’.  And, I’ve always been more into guy sports anyways so I decided to try it.”

In her second season as a wrestler, having competed last season in middle school, Perkins said she is coming into her own in the sport.  “These boys make me work as hard as I can.  Even though I get tired, they keep pushing me and pushing me.  My coach is probably one of the best people we have around here.  When I’m ready to give up, he’s the one that tells me ‘you got it, keep going’.”

She hopes to win many of her matches this season with the goal of qualifying for the state tournament.  “I don’t see a lot of girls in the sport.  It’s really a male-dominated sport.  I know how hard it is on my body trying to drop the weight, and our bodies function differently as women.  I know how hard it is to wrestle against guys that don’t want to wrestle you or are just mean because you’re a girl and they don’t think you’re supposed to be in this sport.  It’s really tough, and I have mad respect for the girls that do this sport.  It really shows who’s family and who’s not.”

Off-season preparation has been vital to this team.  Pheasant noted, “All summer long, I’d get up at 4:30 a.m. every morning, work out, go to the MMA gym in Sylva, come back, work out and go to practice, work out after and roll around with our old coach, Tavi Rivera – it’s non-stop really.”

Taylor added, “In the off-season, I wake up early and get to the gym and work out for about an hour-and-a-half or so.  I go home, rest, and continue that for the rest of the day.” 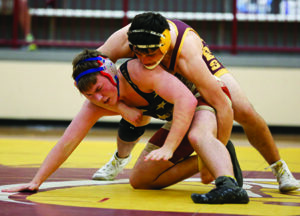 Ian Crowe, top, Cherokee senior, wrestles James Calloway, of Madison, in a match at the Charles George Memorial Arena on the evening of Friday, April 30. Crowe won the match on points.

Mike Winchester, CHS head wrestling coach, said of his team, “We have a couple of kids that are very inexperienced.  We have a couple that are very experienced, and that’s a good thing.  Our older guys are really doing a great job of teaching and helping me coach – helping the other kids learn.  As seniors, Braden and Caden are phenomenal kids.  I couldn’t ask for anything better than those guys.”

He added, “We’ve got a couple who are struggling to make weight.  As soon as we make weight, we’ll have a pretty good team.”

Coach Winchester said his goal is for at least three CHS wrestlers to qualify for the state tournament.  “It’ll be hard this year.  The brackets are cut down.  They’ll be 16-man brackets instead of the big, traditional brackets.  Regionals will be a one-loss and you’re out event.  It’s never been like that before.  So, they’ll be no chance to wrestle back through the bracket and finish third or fourth.”

Ian Crowe, a senior who will wrestle this season at 195lb., said that wrestling in a COVID environment has been odd but that he and his teammates are focused on the work at hand.  He summed up the team’s commitment stating that he wants to simply “make weight, make state.”