Tribal officials of the Eastern Band of Cherokee Indians (EBCI) cut the ribbon to open Phase II of the Road to Soco Apartments officially on the afternoon of Wednesday, April 28.  A total of 24 new units were added with the Phase II expansion which included the opening of buildings F and G.

Units are available in various sizes including:

A security deposit equal to one month’s rent is required, and DirecTV is included in the monthly rent.  The complex is pet-friendly and requires a pet application plus a $250 non-refundable deposit. 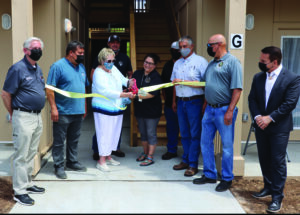 “I’m really excited about this Phase II opening up and then the Acquoni Road project happening next,” Principal Chief Richard G. Sneed said during Wednesday’s event.  “I do want to tip my hat to Housing…the team that works up there in the administrative offices doing loans, doing rate buy-downs, doing down-payment assistance, getting folks into homes – we’re putting a lot of people into homes.”

He added, “This is going to open up a lot of opportunities for more of our families.  We’ll get rolling on Acquoni Road and get rolling on Camp Creek.  We’ll just keep putting our Cherokee families into homes.  I appreciate everybody’s hard work.  Let’s hear it for Housing.”

Vice Chief Alan B. Ensley commented, “We really do appreciate all of the hard work that all the Housing employees do on a daily basis.  We call on you every day.  I know Bunsey (Crowe) has really put a lot of time and effort into this and all the projects.”

He continued, “There’s a lot of hard work that goes into all of these projects.  Our enrolled members, and people from the surrounding counties, all get to benefit from these projects we’re doing now.  We really appreciate it.” 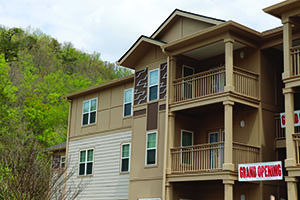 Edwin Taylor, Secretary of Cherokee Indian Housing Division (CIHD), noted that the program now has 162 market rate units.  He told the One Feather, “Within the market rate units, we provide work-force housing on an as-needed basis based on availability.  CIHD also manages 21 Housing Improvement Program (HIP) units that serves elders and disabled members of the EBCI and has an inventory of 147 affordable housing rental units funded through our Indian Housing Block Grant.  These units are for low-income members of the EBCI and members of other federally recognized tribes.”

Taylor noted that projects CIHD has in development will add from 350 to 400 additional units in the next three years.

Big Cove Rep. Perry Shell, chairperson of the Housing Committee for Tribal Council, spoke during the ribbon-cutting event noting, “I come from a time where I don’t know if anybody ever pictured things like this happening around here…there was some opposition in Housing.  They said our people wouldn’t live like this.  They wouldn’t live in an apartment-type complex.  I always knew we would because of experiencing this in other places.  I think the people that are there now in the other buildings are, overall, happy with what they’ve got.”

Rep. Shell is retiring from public office later this year and said, “So, when I leave this year, I think it will be in good hands.  I think we’ll continue to work forward with this initiative to provide what we can for our people.  And, I’m glad that we have the resources right now to do this and that it will generate revenue to keep doing these things for our people.  We can look out for the next generation and the next generations to come.  Thank you to all that had anything to do with this.”

For more information on renting in the Road to Soco Apartment complex, call 359-6940.