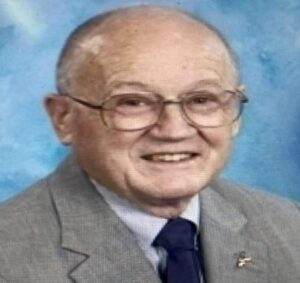 Alvin (Al) G. Rogers, 88, of Cherokee, went home to be with his Lord and Savior on Saturday, April 10, 2021 at Care Partners Health Services in Asheville.

Al was born April 7, 1933 in Knoxville, Tenn.  He was the seventh of eight children of Francis and Cora Rogers.  After graduating high school, Al attended the University of Tennessee for one semester.  He left the university to attend Carson Newman University where he met Mary Jo, the love of his life.  He is a graduate alumnus of Carson Newman University class of 1955 where he pursued his teaching degree and received his bachelors.

Al was an American veteran who served in the U.S. Army from June 1956 until June 1958 at Ft. Dix in New Jersey.  After completion of his active service, he and Mary Jo pursued their teaching careers starting in Knoxville until they secured teaching positions in Fort Lauderdale, Fla. in 1960.  Al later attended Appalachian State University where he furthered his education for his master and specialist degrees.

He taught school at Rogers Middle School in Fort Lauderdale.  He was an English and Spanish teacher for the majority of his teaching career. Al also taught English to Spanish speaking individuals at night school. During the latter part of his career, he was the librarian at the school. He completed his entire career and retired from the Broward County School System after 33 years of excellent service.

He and Mary Jo were able to spend many years traveling.  They joined many Christian travel groups as they were able to visit all 50 states.  He enjoyed traveling by bus across the country as he could see the United States.  They also were able to travel to Europe, they also visited Israel twice.  Al was baptized in the Jordan river during one of his trips to Israel.

Al was a very religious man and became a member of First Baptist Church in Fort Lauderdale, Florida.  Al was a long-time member of First Baptist Church, he served many years as a Deacon, later he was appointed an Emirate Deacon. He belonged to and enjoyed the Truth-seekers Bible class. He also taught Evangelism Explosion at First Baptist Church.  He also became a member of Cherokee Baptist Church in Cherokee, North Carolina.  Cherokee Baptist Church is where he and Mary Jo were married back on Dec. 26, 1955.  They spent almost 70 years together.  He was also very active at the Cherokee Senior Center, Tsali Manor, where they had lunch five days a week.  He enjoyed the many senior trips provided by the senior center.  He also enjoyed visiting and communicating daily with everyone at the center.  He spent most days of the week at the Cherokee life Center (gym) exercising and swimming in the pool.

He was loved by many and will be truly missed by all.

Memorial service will be at 1 p.m. on Saturday, June 12 at the Cherokee Baptist Church, 812 Tsalagi Rd., Cherokee.